Consumer doesn’t give up against bad gas deal, gives big thanks to CUB 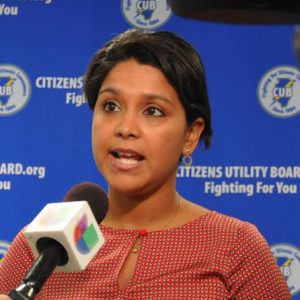 Like many Illinois consumers, John Van Hattem had second thoughts after he enrolled with an unregulated gas supplier that came to his door.

John called the company—Illinois Gas & Electric—to cancel, only to hear a recorded message saying, “…the issue is with your local gas utility company.”

Next, he called his regulated utility, Nicor Gas, which told John it couldn’t cancel his service for him. So he called Illinois Gas & Electric again, only to receive the same recording.

John mailed a cancellation form, but didn’t get an immediate response. Then came his first bill in April, and John discovered he was paying 51 cents per therm—about 19 cents higher than Nicor’s rate (32 cents per therm) at the time.

John, a loyal member of CUB, filed a complaint with the help of Annie Warnock, a consumer rights specialist with the watchdog group. According to CUB’s complaint files, Illinois Gas & Electric responded that the cancellation letter had been overlooked.

The company immediately processed the cancellation and issued John a $70 rebate, the difference between what he paid with Illinois Gas & Electric vs. what he would have paid with Nicor.

CUB thanks consumers who stay persistent when bill discrepancies occur. This time John thanked CUB, and specifically Annie for her help.

In a handwritten note, John said: “I appreciate very much what you did for me. Very professional and very effective.”

The note included a generous donation to CUB!

“I happened to think that many of the people you help are not in a (financial) position to show appreciation,” John wrote. “I am, so I am!”

Your ticket for the: Consumer doesn’t give up against bad gas deal, gives big thanks to CUB

Consumer doesn’t give up against bad gas deal, gives big thanks to CUB