The Future Energy Jobs Act (FEJA) proves that strong bipartisan leadership can grow a clean energy economy that creates jobs and reduces power bills. And from dozens of recent listening sessions across Illinois, residents have an urgent message for the new governor and General Assembly: Don’t stop now!

Thanks to FEJA, historic state legislation that celebrates its second anniversary of passage on Dec. 6, good things are happening in Illinois: 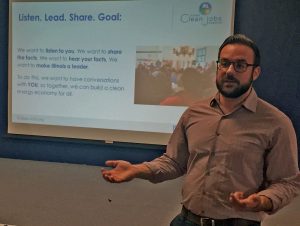 But how do we build off this momentum? That’s why the Illinois Clean Jobs Coalition launched the “Listen, Lead, Share” Campaign. So far, we’ve held 58 community conversations, in cities like Chicago, Peoria, East St. Louis, and Carbondale, and we’ve found strong support for state leaders to tackle these four pillars:

CUB has participated in about 20 of these events, and Environmental Outreach Coordinator Scott Allen says he’s concentrated on listening. “With passage of the Future Energy Jobs Act, Illinois has taken great strides toward a clean, affordable energy future, and we want everyone to be part of the discussion on how we build off that momentum,” Allen said. “It’s key that people from every corner of Illinois come together to talk about the economic advantages of affordable, clean energy and how we achieve that for everyone.”

In Illinois, energy policy is transforming lives. “The state wants green energy, and this has allowed me to stay in my home,” said Bill, a DeKalb retiree, who used solar power to cut his “outrageous” electric bills.

FEJA has given Illinois a great head start, but given gridlock in Washington, there is an urgent need to continue to lead. Illinois consumers like Bill are counting on us.

Your ticket for the: “Listen, Lead, Share” shows urgency for clean energy future