What’s in an audit? 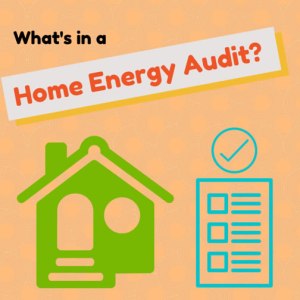 Oak Park resident Alan Goldberg (father to CUB’s very own environmental outreach coordinator, Laura Goldberg) knew his home was a little “drafty.”  But he had no idea just how much energy he was losing— until he got a home energy audit.

A home energy audit is an assessment of your house for potential inefficiencies.  Think of it like a “checkup” for your house.

During an audit, a professional technician visits your house to determine where you might be losing energy and money.  Auditors check for leaks, test insulation, and inspect fireplaces, furnaces, lighting fixtures, outlets and windows for energy loss.  They then recommend actions to take to reduce inefficiencies and save you money.  If you’re looking to cut your power bills, the inspection can be a great first step to savings.  In fact, the U.S. Department of Energy says you can save between 5 and 30 percent on your energy bill by making the efficiency upgrades suggested in an audit.

Goldberg decided to get an audit— offered through Energy Impact Illinois for $99—  after attending a CUB event at the Forest Park Library.

He suspected his home, built in 1902, was poorly insulated and sealed, but he wasn’t prepared for what the auditor told him: Goldberg’s home was one of the draftiest the auditor had ever encountered.  A blower-door test, which locates and measures air leaks, recorded the house had a 77 percent inefficient air leakage rate!

“It was a classic ‘better late than never’ experience,” Goldberg said. “The $99 energy audit was an easy way for me to learn the truth about just how bad my house was in terms of energy efficiency, and now hopefully I will be able to make a major improvement.”

If you would like more information on a home energy audit through Energy Impact Illinois, visit this website.

Your ticket for the: What’s in an audit?

What’s in an audit?