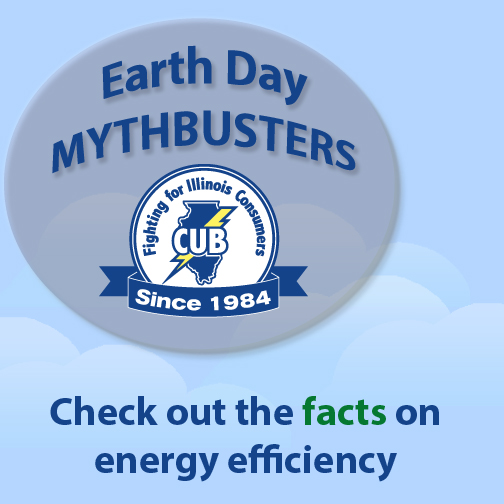 Earth Day reminds us that we can all go a little greener in our day-to-day lives. But first we need to dispel a few tall tales about energy use.

That’s why we’re presenting you with a little Mythbusters: Energy Efficiency Edition.

FACT: Electronics are still draining energy if they are plugged in. Make sure you turn them off AND unplug.

2.) MYTH: The higher or lower you set your thermostat, the faster it will heat up or cool down your home.

FACT: Cranking the dial on your thermostat won’t make your home heat up or cool down faster.  Set it to your desired temperature to avoid wasting energy.

Electricity use is the largest source of greenhouse gas emissions—including mercury emission.   While CFLs contain a small amount of mercury (an average of 4 milligrams per bulb), a traditional 60-watt incandescent bulb causes more than three times the mercury emissions of a CFL—even if that CFL is mistakenly thrown in a landfill, according to EnergyStar.gov.

However, given the small amount of mercury, it’s important to properly dispose of CFLs properly.  No mercury is released when the bulbs are intact or in use.

(Note: If you’re still bugged by the mercury, don’t forget LED bulbs. They can save you even more energy and money–and they don’t contain any mercury. Read CUB’s guide on CFLs and LEDs.)

FACT:  Remember: fans cool people, not rooms.  Fans work by circulating the air in a room, so that we feel a pleasant breeze sensation.  We feel cooler, even though the temperature in the room hasn’t changed.  No people?  No need to run the ceiling fan.

5.) MYTH: Turning on and off the AC wastes energy.  It’s better to leave it running.

FACT: While it may seem like turning the AC on and off would burn up energy, you’ll save more money by turning it off when you leave the house, even if it’s just for a 15-minute trip to the grocery store.  If you’re worried about things being too hot when you return, consider buying a programmable thermostat to set your desired temperatures throughout the day.

Your ticket for the: Mythbusters: Energy Efficiency Edition