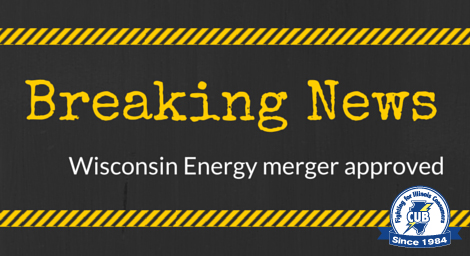 CUB had hoped to see the ICC attach stronger pro-consumer conditions to the merger—especially in light of a Peoples Gas pipeline replacement program that is costing consumers billions.

The ICC ordered an audit of the program after projected costs doubled to $4.6 billion in its first five years.  These ballooning costs could cause gas rates to double over the next decade, according to an analysis by Illinois Attorney General Lisa Madigan’s office.

The ICC’s audit was pretty damning, revealing that the project has been riddled with mismanagement and ineptitude.  And in the mean time, Illinois ratepayers have suffered three rate hikes to pay for the disaster.

As the merger progresses, CUB will work closely with regulators and consumer advocates to make sure that Wisconsin Energy is held accountable and Chicago gas customers aren’t on the financial hook for their gas company’s mistakes.

Your ticket for the: ICC approves Wisconsin Energy merger