The Environmental Protection Agency (EPA) is set to issue final rules this summer on the Clean Power Plan— the plan to cut carbon emissions from power plants 30 percent by 2030.  In anticipation of this historic decision, we are asking CUB Action Network members: Do you support the Clean Power Plan?

If you haven’t completed the survey, click here.  And tell your friends, too!

Clearly, interest in the federal government’s plan is high.  More than 2,400 people responded to our survey so far, with 1,609 saying they supported the plan, 606 saying they opposed it, and 214 reporting they were unsure. 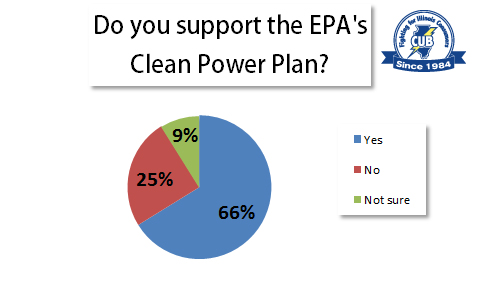 Using a baseline year of 2012, the plan’s nationwide goal is to help cut carbon pollution from the power sector by 30 percent by 2030. Illinois’ individual goal is to cut emissions by approximately 33 percent.

Debate around the proposal has been escalating since it was released last summer. A D.C. Circuit Court recently rejected two challenges to the proposal— and those challenges came before the EPA even released the final plan.

Proponents of the proposal say it will reduce devastating and unsafe pollution levels and boost energy efficiency, which will lead to significant savings on residential power bills. Opponents, however, say it will lead to job losses at coal plants and could produce higher electric bills in some states.

CUB Action Network members represent diverse view points—and our survey results show that this is a complicated issue for many.  Stay tuned to CUB’s WatchBlog for the latest on the Clean Power Plan.

Your ticket for the: 2,400+ respond to CUB’s Clean Power Plan survey