This week, CUB is asking Illinois consumers to sign our petition expressing concerns about AT&T’s push to buy Time Warner for $85.4 billion.

The blockbuster deal, which will be subject to a Justice Department review, joins media giant Time Warner (owner of HBO, CNN and Warner Bros. Studio) with AT&T, the top pay-TV company, the second biggest wireless carrier, and the third biggest broadband provider.

Red Flag #1: A merger of this size could reduce competition in the technology, media and telecommunications industries and increase prices for consumers.

Red Flag #2: It could reduce choices. For example, if the merger went through, AT&T could herd customers to the phone giant’s own offers, and elbow out smaller, independent artists.

The companies hope to finalize the deal by the end of 2017. Please, sign our petition! 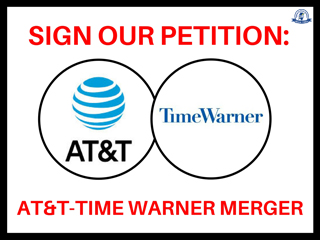 Your ticket for the: Sign CUB petition about AT&T-Time Warner merger