Gas prices are up–but don’t fall for these myths 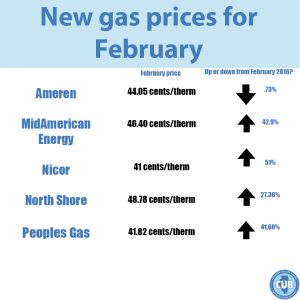 Overall, the Energy Information Administration (EIA), the statistical arm of the Department of Energy, has said Midwest gas customers can expect to pay up to 30% more on their gas bills this winter. However, prices are still about the same or lower than the average prices of the past decade, the EIA said.

Despite the headlines about higher utility prices, be careful if somebody tries to pitch you an offer from an alternative supplier. Customers in Northern Illinois can choose another company to supply them with natural gas. However, CUB put out a new guide today telling people that it’s likely the regulated utility–Nicor Gas, North Shore Gas or Peoples Gas–is your best bet compared with alternative gas suppliers.

In particular, look out for these myths sometimes peddled by people pitching alternative gas offers.

1) You must sign up with an alternative supplier.
False! Signing up is optional. If you’d rather stay with your regulated utilities as your supplier you can. It’s your choice.

2) Going with an alternative supplier is guaranteed to save me money.
False! Nobody can guarantee savings. If a deal seems too good to be true, it probably is. In fact, past CUB reviews of the gas market have shown that about nine out of 10 plans were money-losers.)

The only major utility company that has a decrease from last year is Ameren Illinois. Its price is down slightly, from 44.07 cents per therm last February to 44.05 cents per therm this month. Note that Central and Southern Illinois at this time do not have gas competition.

Your ticket for the: Gas prices are up–but don’t fall for these myths

Gas prices are up–but don’t fall for these myths