CUB calls on governor to veto a bad water bill 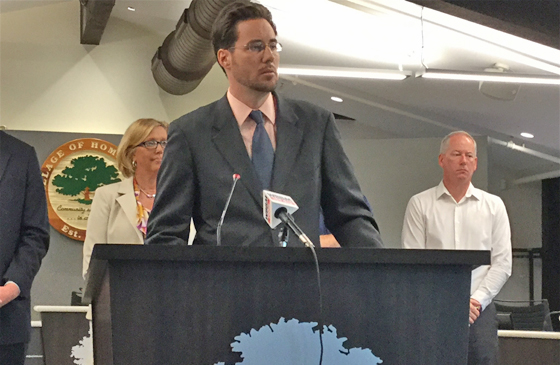 CUB’s Bryan McDaniel stands with suburban leaders to ask Gov. Bruce Rauner to veto HB 4508, a bill that could lead to higher water rates across the state. Click the image to urge the governor to veto this bill.

CUB made headlines this week when the watchdog group stood with state senators and suburban mayors to ask Gov. Bruce Rauner to veto House Bill 4508, legislation that will give special treatment to Illinois’ most powerful private water companies and opens the door for higher water rates for people across the state.

See the coverage in the Chicago Tribune, WBBM Radio and Homer Glen Patch.

“We want Gov. Rauner to know that this bill is bad news for Illinois American Water and Aqua Illinois customers, as well as any communities in their path,” said Bryan McDaniel, CUB’s director of governmental affairs.  “It allows two profit-hungry private water companies to expand at a pace heretofore unseen in Illinois.”

Under HB 4508, the companies can automatically raise their existing customers’ rates to fund municipal acquisitions—by 2.5 percent for one acquisition, or a total of 5 percent for multiple acquisitions. The new bill is actually worse than the legislation passed in 2013, because it removes a 7,500-connection cap on the size of systems that the water companies can buy.

HB 4508 easily passed the Senate, but failed to get a veto-proof majority in the House, opening the door for a gubernatorial veto. The legislation is now on the governor’s desk, and he has 60 calendar days to sign it.

Your ticket for the: CUB calls on governor to veto a bad water bill

CUB calls on governor to veto a bad water bill