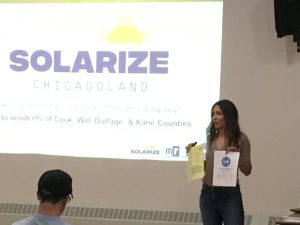 The sun may have been setting over Evanston one recent evening, but the crowd gathered at the local civic center wanted to learn all about how solar power could reduce their electric bills and their carbon footprint with the help of a program called Solarize Chicagoland.

“There’s a lot of energy around solar right now,  no pun intended,” said CUB volunteer Jessica Sieja, who led the Evanston crowd through one of the 66 “Solar Power Hours” that CUB has helped organize this year to educate people about Solarize Chicagoland.

This is the ideal year to go solar in Illinois. Never before has the state had so many attractive incentives for people interested in going solar—including a 30 percent federal tax credit and an additional state incentive that can cover up to 35 percent of installation costs. And solar is made even more accessible and affordable through the Solarize Chicagoland program—but time is running out. Customers only have until Sept. 30 to sign up. Here’s how the program works:

Residents and small businesses who sign up for the program participate in a bulk group-purchase of solar panels. Through a competitive bidding process earlier this year, one installer, GRNE Solar, was chosen to install panels at each participant’s home at a reduced rate. Participants get additional discounts on the installation costs as Solarize Chicagoland reaches certain goals. The current program is only open to people who live in Cook, Kane, DuPage and Will counties. The four counties are partnering with the Midwest Renewable Energy Association (MREA) and CUB to make the program possible. Interested property owners have until Sept. 30 to sign up.

For more information, visit SolarizeChicagoland.com, where you can watch a webinar on the program.

CUB’s Christina Uzzo has spent the year helping to explain the program, discussing the projected costs of installing solar and highlighting these incentives:

Solar Renewable Energy Credits: Thanks to Illinois’ Future Energy Jobs Act, passed in 2016, the state will purchase the “Solar Renewable Energy Credits,” or SRECs, that your system produces at a set dollar amount. SRECs allow you to sell the environmental value of the solar power you produce—you earn one SREC for every 1,000 kilowatt-hours. For residential solar, this incentive is an upfront payment determined by how much energy your system is expected to produce over 15 years. This could cover up to 35 percent of your installation costs.

The Federal Solar Investment Tax Credit: This tax credit lets you deduct 30 percent of your solar project costs from your federal taxes. The credit is available through 2019, but it drops to 26 percent in 2020 and 22 percent in 2021.

On-bill Credits from your Electric Utility: Once you have installed your system, you will not always be using 100 percent of the electricity it produces in real time. Excess electricity is sent back to the grid and you’ll receive bill credits for that electricity in a process called “net metering.” These credits help maximize your monthly bill savings and ensure you’re credited for every kilowatt-hour (kWh) your system produces, which helps pay off the remaining installation costs faster.

“At CUB, we are very excited about the incentives available to Illinois consumers, but we know that with all the new buzz around solar it can be confusing to figure out what’s best for you,” said Uzzo, CUB environmental outreach coordinator, who was also at the event in Evanston. “I’ve loved giving the Solar Power Hour presentations because they are a great way to get into communities and talk about solar face-to-face.”

The Solarize Chicagoland program currently has 59 households signed up for the program, for a total of 439 kilowatts (kW) of solar energy. Certain program goals –150 total KW, 250 KW and 500 KW — trigger discounts for all program participants. More consumers, such as Christopher Gotschall of Evanston, have signed up each week.

“We try to source our energy from renewable and sustainable sources as much as possible to combat climate change, and for years have wanted to install solar panels, but it was never affordable,” Gotschall said. Luckily, through Solarize Chicagoland Gotschall learned about the “incentives available and the benefits of installing now instead of waiting. It’s something we can finally afford.”

Part of making solar simple involves helping select a solar installer. Solarize Chicagoland’s advisory committee is comprised of sustainability staff from Cook, DuPage, Kane, and Will counties who reviewed a competitive request for proposals issued by the MREA, and selected a single installer to help carry out the program. This ensures customers get the simplicity of a single installer and the confidence that the selection was made from a number of competitive choices.

“Having Solarize Chicagoland vet suppliers was huge,” Gotschall said. “I didn’t have to spend hours researching and comparing, they did all that work for me and negotiated the best prices.”

Hunter, who listened to the Evanston presentation, is also a believer in solar. “It’s an investment worth making,” he said. “I have a rooftop that doesn’t do anything except get hot in the summer.”

Susan, another audience member, called Solarize Chicagoland a “fantastic program,” and said she’s pleased that “finally solar is taking off” not only for our pocketbooks but also for the planet. “I would like to leave a planet to future generations,” said Susan, pounding a nearby table for emphasis.

Your ticket for the: The power of solar! CUB alerts consumers to affordable solar program, as Sept. 30 deadline nears