Today CUB and other members of the Illlinois Clean Jobs Coalition delivered more than 23,000 petitions from Illinoisans asking Gov. J.B. Pritzker to support the Clean Energy Jobs Act (CEJA). Coalition members presented the petitions at both the governor’s Springfield and Chicago offices, after holding news conferences.

CEJA is a comprehensive bill that puts Illinois on a path to a carbon-free electric sector, lowers electricity costs, reduces pollution from transportation, protects communities, and creates equitable job creation in communities across Illinois. CEJA is currently the only energy bill in Springfield based on bottom-up, statewide feedback from communities, collected through more than 50 community dialogues in 2018 that focused on energy, jobs, and the environment.

It is critical to pass CEJA (take action here!) in the Illinois General Assembly this spring to protect consumers from what could be the largest electric increase in Illinois history. Last month, Trump appointees on the Federal Energy Regulatory Commission (FERC) issued a ruling that would force Illinois consumers to pay extra for electricity generated by coal and other dirty sources of power that aren’t needed to serve local demand. FERC’s order amounts to another massive bailout for coal and gas power generators.

“The FERC ruling would slam northern Illinois consumers with an electric increase of up to $864 million a year,” Uzzo said. “But the Clean Energy Jobs Act would shield consumers from these higher bills—and it includes ironclad consumer protections that guarantee cost savings for ComEd customers. We urge Springfield to pass CEJA, because it would empower the state to secure clean, affordable energy for all Illinois consumers.” 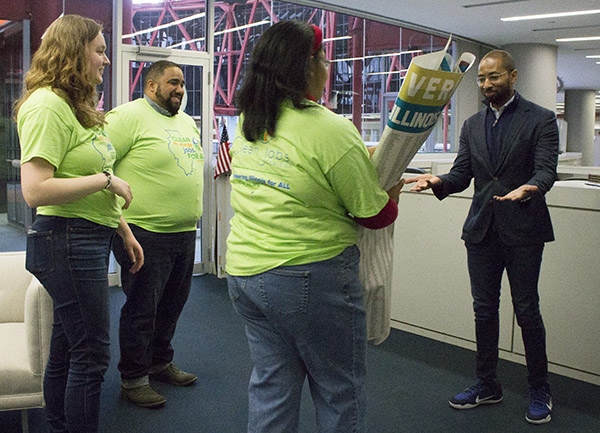 Your ticket for the: More than 23,000 pro-CEJA petitions delivered to governor