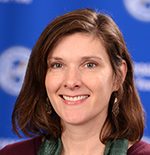 Typically, Sarah Moskowitz would be at one of CUB’s popular utility-bill clinics helping consumers avoid bad deals from alternative suppliers. But last week, the watchdog group’s new deputy director was sitting alongside some of those companies at an Alternative Supplier Policy Session hosted by the Illinois Commerce Commission (ICC).

Sarah, a 20-year veteran of CUB, opened her remarks at a consumer-education policy discussion with a pointed reference to the other speakers: “I was curious to hear how my fellow panelists talked about their consumer education efforts, because I can’t help feeling that, were consumers truly informed about these companies’ offers, most of them would never sign up.”

Sarah, who has been working for CUB in various roles since 2000, also coordinates CUB’s outreach team.

At the panel discussion Wednesday, Jan. 22, she spoke of CUB’s consumer education efforts: more than 500 events each year, a hotline that fields thousands of calls annually, quarterly newsletters that are sent out to 35,000 Illinoisans, and thousands more reached through CUB’s website and emails.

“The work my colleagues and I have been doing at CUB is making a difference,” she said. “Every day that we’re out in the field, we’re helping people.”

“Unfortunately,” she said, “my work has been largely dominated by helping people who have lost money because of alternative suppliers – first on the gas side, and now, on the electric side too.”

Sarah told the story of a consumer who attended one of CUB’s clinic in Arlington Heights last week. Her electricity rate was 13 cents per kilowatt-hour (kWh) with an alternative supplier — nearly double ComEd’s 7.175 cents per kWh price. After switching back to the utility, the consumer will save $39 per month. 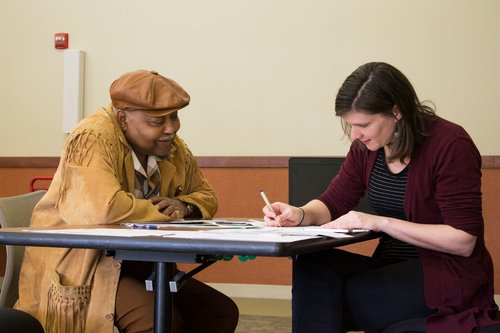 Sarah working with a consumer at one of CUB’s utility bill clinics.

“So there’s someone we helped, in a real way,” Sarah said. “But there are so many we haven’t gotten to. We’re just playing whack-a-mole here.”

Competition that thrives off of scamming and manipulating the most vulnerable of consumers — seniors, people living on low or fixed incomes, people challenged by language barriers — is not only unfair, but Sarah said it taints everything. That includes quality programs not offered by alternative suppliers, like energy efficiency programs and demand-response offers, like Hourly Pricing.

“The retail choice situation is impeding the ability of good actors, the people promoting good programs and good products, to engage in productive, forward-thinking dialogs about energy,” she said.

There is hope. Sarah said a recently-enacted state law should help flip some of the market’s issues in favor of consumers.

The Heat Act, one of the nation’s toughest consumer protection laws, takes aim at the rip-offs and bad deals peddled by alternative electric and gas suppliers.

Now that the act is the law of the land (as of Jan. 1), our task is to assure that “the HEAT Act is properly enforced,” Sarah said. “When there are violations of the law, a slap on the wrist … isn’t going to suffice for the consumers of our state.”