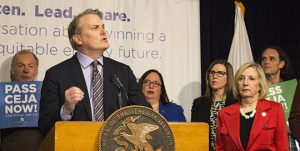 CUB Executive Director David Kolata on the FERC ruling that will lead to higher bills: ““The FERC ruling was structured specifically to penalize states such as Illinois that have made cost-saving investments in energy efficiency and renewable sources of power. But if we act now, we can take the power back from Washington.” (Click the photo to take action.)

Clean energy legislation pending before the General Assembly stands as the only viable alternative to an explosive increase in electricity costs—believed to be the largest in state history—for millions of Illinois consumers, following a recent regulatory ruling by appointees of President Trump, the Illinois Clean Jobs Coalition said Tuesday.

The coalition of consumer, business, environmental, and faith-based organizations joined with state Rep. Ann Williams, state Sen. Cristina Castro and numerous other lawmakers to urge Gov. Pritzker and state legislators to pass the Clean Energy Jobs Act (CEJA). The bill contains a provision that would negate an estimated $864 million increase in power bills that threatens to hit northern Illinois  consumers in the wake of the Dec. 19 Federal Energy Regulatory Commission (FERC) ruling.

In fact, CEJA contains consumer protections that would not only prevent the Trump administration’s cost increase from taking effect, but would also lower northern Illinois power bills below their current levels.

The controversial FERC ruling, adopted by a 2-1 majority comprised of Trump-appointed regulators, would force Illinois consumers to pay extra for electricity generated by coal and other dirty sources of power that aren’t needed to serve local demand. Consumer advocates said it reflects two recurring themes of the Trump Presidency—his distaste for clean energy and a mission to bail out the coal industry—that should signal to Illinois lawmakers that the White House could be using the state’s energy policy as a political weapon.

The ruling impacts a dozen states, but northern Illinois faces one of the most damaging increases, according to an analysis by the consulting firm Grid Strategies, which estimated that power bills here could skyrocket by $864 million a year.

“The Federal Energy Regulatory Commission (FERC) policy doesn’t make sense for our economy or our environment,” U.S. Senator Dick Durbin (D-IL) said. “Working families will see increased energy bills and jobs will be lost in the growing clean energy industry. States like Illinois have been leading the way in taking advantage of clean energy sources such as wind and solar power and the FERC should not be stunting such growth for the benefit of energy company executives.”

“This is a clear example of the Trump administration interfering with Illinois’ energy policy to make us pay more for ​expensive and dirty power,” said state Rep. Ann Williams, CEJA’s House sponsor. “The General Assembly has an excellent opportunity to pass the Clean Energy Jobs Act and protect northern Illinois residents from nearly a billion dollars in higher electric bills ​every year. But we must act now, before these higher bills are locked in.”

“The Clean Energy Jobs Act will make the state a national leader in securing clean, affordable energy for all consumers in the state,” said state Sen. Cristina Castro, CEJA’s Senate sponsor. “Climate change is an emergency we can’t ignore, and the Trump administration is doing everything it can to bail out fossil fuel power plants and force

Illinois to take a giant step backwards from achieving 100 percent renewable energy.  Illinois has to act immediately—our power bills and our planet demand it.”

“The FERC ruling was structured specifically to penalize states such as Illinois that have made cost-saving investments in energy efficiency and renewable sources of power,” said David Kolata, executive director of the Citizens Utility Board (CUB), a coalition member.  “But if we act now, we can take the power back from Washington. Not only will the Clean Energy Jobs Act stop a devastating, record-high hit to our electric bills, but it can also lock in savings for consumers. CUB supports CEJA because it’s the only energy bill in Springfield that offers a blueprint for protecting our pocketbooks while helping Illinois achieve 100 percent clean energy to protect our planet.”

FERC’s ruling applies to PJM, an organization that manages the power grid and plans for long-term electricity needs—especially when demand is highest. The nation’s largest grid operator, PJM covers a vast territory that includes northern Illinois and all or parts of a dozen other states.  It assembles this long-term power supply—known as “capacity”—from electricity generators that participate in an auction that it conducts. Illinois customers pay for these capacity costs through the supply charge on their electric bills.

The new rules approved by FERC will change these auctions  in a way that rewards dangerous fossil fuels that generate power from coal- and gas-fired plants, giving them the license to charge inflated prices and then impose the added costs on customers in northern Illinois and throughout PJM’s territory.

As a result of the FERC decision, electric customers across the Chicago region and most of northern Illinois are facing an imminent increase in the amount they pay to reserve enough power—known as the “capacity price”—to meet projected future demand for electricity. FERC’s action directly undermines the state’s 2016 passage of the Future Energy Jobs Act. The law promotes clean energy goals and consumer savings through increased investments in energy efficiency and zero-carbon emissions sources, such as wind, solar, and nuclear power.

“The impact of the federal decision will be particularly harmful for the many small businesses that are providing new job opportunities in the clean energy industry in disadvantaged communities across the state,” said Pattilyn Beals, interim executive director for the Chatham Business Association. “Our lawmakers should do everything possible to grow and attract new and small businesses in our communities, encourage large-renewable energy and energy efficiency projects, and help entrepreneurs understand opportunities in renewable energy and energy efficiency.”

“The FERC order places the costs of subsidizing inefficient fossil fuels indirectly, through polluting the environment, and directly, through increasing electric bills, on residents throughout the U.S. and particularly in Illinois, effectively hampering the progress Illinois has made through the Future Energy Jobs Act,” said Edgar Sandoval, volunteer for Clean Power Lake County. “This comes at the expense of the environment and at the cost of residents who desire a shift in how we produce electricity for the state.”

The FERC decision comes amid an ongoing campaign by the Trump administration to prop up coal-fired power plants. In recent years, fossil fuel generators have been pushing for such a move as it becomes more difficult for their outdated plants to compete in the face of more modern technology, like solar and wind farms, and state policies that promote cleaner forms of energy.  Last year, the CEO of Vistra Energy, a major coal-fired power generator, said coal “is on its way out.” More recently, the president of the Illinois Coal Association called coal “a lost cause in Illinois.”

To protect consumers from the higher bills, the Clean Energy Jobs Act would authorize the state to assume the responsibility for managing its capacity needs. Instead of Illinois relying on PJM’s capacity auction, a state agency, the Illinois Power Agency (IPA), would be tasked with running Illinois’ own capacity auction.

The IPA already manages the power purchases of the state’s biggest electric utilities, and part of its mission is to protect consumers from unnecessary increases in their supply costs. The state agency is better positioned to run Illinois’ capacity auction and ensure that northern Illinois consumers save money while the state’s clean energy goals are advanced. In addition to protecting customers from the FERC increase, CEJA’s capacity market provisions include a “consumer protection adjustment,” which locks in a 5 percent reduction on northern Illinois electric  bills for the next five years. Capacity market reform is one part of the Clean Energy Jobs Act, the most comprehensive and consumer-friendly energy bill to address climate in Springfield. The legislation also:

Send a message to Gov. Pritzker and your legislators, urging them to pass the Clean Energy Jobs Act.

Your ticket for the: Bill pending in IL General Assembly would quash the threat of $864M increase on Northern IL customers