Fed up with reckless spending by Peoples Gas, ratepayers, consumer advocates, and Chicago City Councilmembers are pressing the natural gas utility for answers about a growing heating affordability crisis in the City. 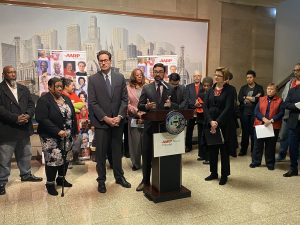 Illinois PIRG Director Abe Scarr says Peoples Gas has used billions of consumer dollars on capital developments that have little to do with safety.

“We have a responsibility to our constituents. We owe nothing to Peoples Gas,” said Ald. Byron Sigcho-Lopez (25th), who said his constituents are choosing between paying for medication or paying for their gas bill. Before a meeting of Chicago City Council’s Committee on Environmental Protection and Energy last week, Sigcho-Lopez called on his fellow councilmembers to stand up to the utility and protect Chicago consumers.

Peoples Gas has abused a special surcharge—the Qualified Infrastructure Plant, or QIP, charge—that allows Ameren, Nicor and Peoples Gas to automatically raise customer bills to pay for pipe replacement. But all three utilities are taking advantage of the QIP charge to fuel billions of dollars in excessive, often unnecessary, spending—and their ratepayers are left with the bill.

Jennifer Edwards, a Peoples Gas ratepayer, said her neighbors on the South Side can’t afford their utility bills but don’t qualify for low-income energy assistance programs. She says people are dipping into what little savings they may have to prevent disconnection.

But in Springfield, consumer advocates like CUB are trying to halt the utilities’ misuse of this surcharge and resulting disconnections. The Heating Affordability & Utility Accountability Act (HB 5247/SB 3497) would end the QIP charge effective Jan. 1, 2021.

“The law already requires safe and reliable service, with or without an extra surcharge to shovel money into their shareholders’ pockets,” said Bryan McDaniel, CUB’s director of governmental affairs. “The utilities don’t need an additional charge to pay for safety measures they should already be taking care of.”

After hearing testimony from consumer advocates in attendance—including CUB, Illinois PIRG, Community Organizing and Family Issues (COFI), and AARP Illinois—the committee passed a resolution urging legislators in Springfield to pass the proposed bill. It is now awaiting approval before the full City Council.

Your ticket for the: CUB, consumer advocates fight to end reckless spending by gas utilities