The clock is ticking: pass CEJA and save our power bills

When the Federal Energy Regulatory Commission voted 2-1 in favor of a proposal pushed by out-of-state power generators, the clock started ticking.

The commission’s December 2019 decision overhauls the rules that govern the price we pay for electricity — it would ultimately prop up fossil fuel companies and force consumers to pay higher power bills for dirty energy we don’t need. As a result, the cost of renewables will go up, hampering Illinois’ efforts to achieve clean, affordable energy. 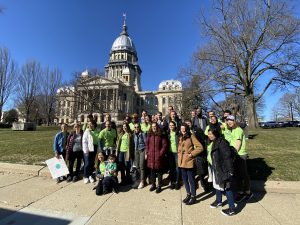 Consumer and environmental advocates gathered at Lobby Day in Springfield in 2019 to support the Clean Energy Jobs Act.

The state can prevent this ruling from going into effect, but we’re running out of time. To put a stop to FERC’s irresponsible ruling, Illinois needs to pass the Clean Energy Jobs Act (CEJA) now.

Since Trump appointees voted to prop up fossil fuels, the comprehensive clean energy legislation has undergone a few updates. In the wake of a bribery scandal in which ComEd paid a $200 million fine to resolve a federal lobbying probe, the bill would also help hold utilities accountable to their customers.

“Profits, rather than people, have dictated energy policy in Illinois for too long, at the expense of residents and small businesses. Energy policy should put people and communities first,” said state Rep. Ann Williams, a sponsor of CEJA along with Sen. Cristina Castro. “The new version of CEJA will make Illinois a national model for addressing climate change and restoring the public’s trust by requiring significant accountability, transparency and ethics requirements for utilities.”

Unfortunately, the COVID-19 pandemic has slowed efforts in Springfield — and rightfully so. Illinois’ response to the pandemic should be a priority. But CEJA can play a critical role in the state’s economic recovery.

The bill would attract more than $30 billion in private investment in clean energy and spark thousands of jobs. “Clean Jobs Workforce Hubs” would also be created — a network of frontline organizations providing workforce training across Illinois for economically disadvantaged communities and former fossil fuel workers.

CEJA would also prevent the disastrous FERC ruling from taking effect in Illinois, but time is running out to protect our planet and our power bills.

The FERC ruling revamps the “capacity market.” Not only do you pay for the power you use now, but you also pay for power you could use in the future. Capacity refers to extra payments consumers give power plant operators for the commitment to have enough electricity available if demand suddenly spikes. (Think of a hot summer afternoon, when everyone blasts the air conditioning.)

The price for capacity for ComEd customers is not a line item on power bills–it’s buried in the price we pay for electricity. The capacity price is set through auctions run by PJM Interconnection, the power grid operator for northern Illinois and all or part of 12 other states and Washington, D.C.. (Ameren’s market is run by a different power grid operator.)

In these auctions, power generators bid against each other for the right to cover a certain amount of potential power demand in the next three years. The plan that FERC approved in December skews the market in favor of fossil fuels and could result in $1.7 billion in higher bills over the next decade if CEJA isn’t passed as soon as possible.

The Clean Energy Jobs Act would also rewrite power procurement rules for the state, but with consumers in mind. The legislation would put the Illinois Power Agency in charge of Illinois’ own capacity market, effectively removing Illinois from FERC’s jurisdiction.

But time is running out. The next auction to determine capacity in northern Illinois could be early 2021, and legislators must act before the state is locked into three more years of expensive, dirty electricity.

Sign our petition and tell your legislators we need CEJA now!

Your ticket for the: The clock is ticking: pass CEJA and save our power bills

The clock is ticking: pass CEJA and save our power bills