We’re paying $4.4 billion more for electricity than we need to be. According to a new report, consumers all over the U.S.—including northern Illinois—are overpaying for a “capacity” charge that’s hidden on most electric bills.

This is a major reason why CUB is fighting for the electricity-market reform provisions in the Clean Energy Jobs Act (CEJA).

Capacity is the price we pay power plant operators for the commitment to have enough electricity available if demand spikes, like on a hot summer afternoon. This fee  is included in the supply charge of your bill, so you’re not only paying for the power you use now, but you’re also paying for capacity—the power you could use in the future.

The price for capacity for ComEd customers is determined by auctions run by PJM Interconnection, the power grid operator for northern Illinois and all or part of 12 other states. CUB has long argued that consumers overpay for capacity. (It has grown to roughly 21 percent of our supply costs in recent years, according to the Illinois Commerce Commission.)

And now a new report says  ratepayers in PJM’s territory are paying $4.4 billion for unnecessary energy. The analysis, by Wilson Energy Economics, reveals that PJM has overestimated its electricity procurement needs for more than a decade. 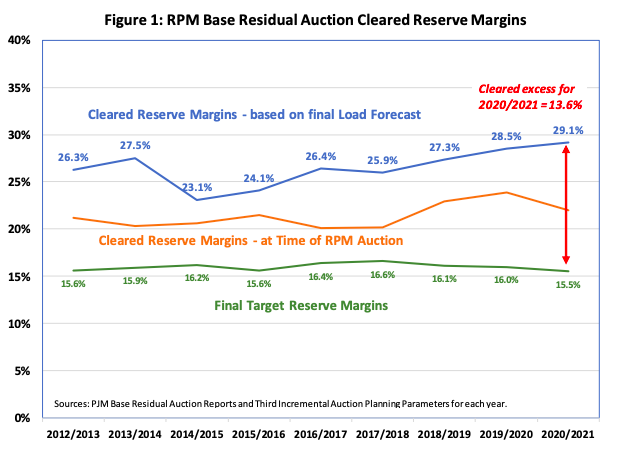 In this chart, the green line represents final target reserve margins, or how much capacity PJM believes it needs to reliably operate the grid: about 16 percent of the expected energy need when demand spikes. But at auctions, PJM regularly procures more capacity than is necessary (the orange line). The blue line includes adjustments and represents how much capacity PJM actually procures. For 2020/2021, PJM procured 13.6% more capacity than it projected it would need.

When PJM procures too much capacity, as it has done for years, ratepayers in its territory (like northern Illinois) pay higher bills than necessary, according to the study. By reducing how much capacity is procured—so that it falls closer to our projected needs (closer to the green line, rather than the blue line)—the study predicts ratepayers in PJM’s territory could save $4.4 billion.

The last thing we need right now is to be paying higher electric bills, especially for energy that we may never need. The good news is that we have the power to stop PJM from buying excess capacity in Illinois.

The Clean Energy Jobs Act (CEJA) would place the Illinois Power Agency (IPA) in charge of the state’s capacity market, effectively removing PJM from the capacity equation. The IPA would then be in charge of procuring an appropriate amount of capacity for Illinois ratepayers.

But we have to act now. A recent ruling by the Federal Energy Regulatory Commission revamped capacity auction rules to favor dirty, expensive power plants and raise bills for ComEd customers by up to $864 million a year. This is urgent: Illinois must pass CEJA to prevent PJM from over-procuring capacity and protect consumers from almost a billion in higher bills.

Read CUB’s Q&A to learn about the ruling, and why the Clean Energy Jobs Act can fix this mess. And take action: Urge the General Assembly and Gov. Pritzker to pass CEJA.

Your ticket for the: Overpaying by $4.4 billion? New report shows why we need electricity market reforms