A cartoon that appeared in The CUB Voice.

A Federal Energy Regulatory Commission (FERC) ruling could increase power bills for most Illinois consumers by up to $1.7 billion over the next decade—what could be the largest electric increase in state history—unless the General Assembly passes the Clean Energy Jobs Act (CEJA) in 2020. (Read CUB’s statement.)

Here’s what you need to know about the controversial ruling and how you can help protect your power bills.

What happened at FERC?
On Dec. 19, FERC voted 2-1 for a proposal favored by out-of-state power generators that is expected to raise our electric bills. It will also raise the cost of solar and wind power and hamper Illinois’ efforts to achieve clean, affordable electricity.

The FERC decision overhauls “capacity market” rules that impact the price we pay for electricity. The rule change will inflate market prices to prop up fossil fuel power plants and, in effect, force ComEd customers to pay higher power bills for dirty power they don’t need.

The vote in favor of this plan was led by two commissioners appointed by President Donald Trump. The Trump administration has been on a campaign to support coal-fired power plants struggling to compete in the electricity market. Fossil fuel generators have been pushing for such a change for more than a year, as it becomes more difficult for their outdated plants to compete in the face of more modern technology, like solar and wind farms, and state policies, like Illinois’ Future Energy Jobs Act, that promote cleaner energy.

How much would this cost consumers?
A recent analysis, “Consumer Impacts of FERC Interference with State Policies,” by the consulting firm Grid Strategies, estimates that FERC’s decision could raise costs for consumers across the power grid by up to $5.7 billion a year. Northern Illinois would be one of the hardest hit areas—electric customers there could pay up to $1.7 billion over the next decade.

What is capacity?
Not only do you pay for the power you use now, but you also pay for additional electricity “capacity” in case it is needed in the future. Utility companies are required to pay power plant operators to have enough electricity generating “capacity” available for times when demand suddenly spikes. (Think of a hot summer afternoon, when everyone blasts the air conditioning.) ComEd and Ameren, Illinois’ two biggest electric utilities, pass these costs through to their customers as part of the electricity supply charges on monthly bills. 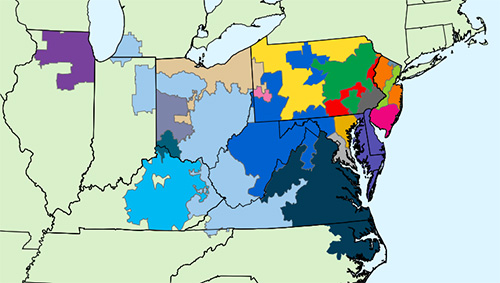 The PJM power grid stretches from Illinois to the East Coast.

During these auctions, power generators bid against each other for the right to cover a certain amount of future power, if needed, and win those capacity payments. The plan that FERC voted on changes the rules that govern these auctions in a way that rewards polluters that generate power from coal- and gas-fired plants, giving them the license to charge inflated prices and then impose the added costs on customers.

Important: The next auction to determine capacity prices in Northern Illinois is scheduled for this spring. That’s why the General Assembly has to act immediately to save customers from higher electric bills.

How does capacity affect my bill?
For most customers, capacity charges are embedded in the electricity supply charge on monthly bills. While energy prices have been relatively low in recent years, capacity has progressively become a bigger part of your bill and is now roughly 21 percent of the supply charge, according to the Illinois Commerce Commission. (By the way, alternative energy suppliers, as well as ComEd, are required to buy capacity, so you won’t escape these charges by changing suppliers.)

CUB has long said that capacity market auction rules are stacked against consumers, causing us to pay higher bills for more capacity than we actually need. And FERC’s new ruling could make it even worse.

Illinois has become a national clean energy leader, but under the new FERC rules, any power resource that is supported by state clean energy requirements won’t count towards capacity fulfillment and won’t receive any of the capacity money paid by consumers. The new FERC policy will raise the market price of capacity, resulting in higher electric bills. And the extra money we pay will go to coal and gas-fired generators, leaving clean energy out in the cold. So we’ll be stuck with higher bills and dirtier energy.

Why do generators want to change the rules?
Big out-of-state corporations that own fossil fuel power plants—companies like Vistra and NRG—and their allies want to change the capacity auction rules to offset state legislation, like Illinois’ historic Future Energy Jobs Act (FEJA). This state law, passed in 2016, expands energy efficiency and gives financial support to zero-carbon energy generators, like nuclear plants. This has helped depress prices in the capacity market. That’s good for our power bills, but it cuts into the profits of fossil-fuel power plants. In fact, the coal and natural gas industry sued the state of Illinois to stop nuclear power plant support, arguing that it unfairly reduced their revenue. They lost: The U.S. Supreme Court eventually rejected a request to review appellate court decisions.

So what can I do?
Support legislation in Springfield called the Clean Energy Jobs Act (CEJA). CEJA includes capacity market reforms that would shield electric customers from skyrocketing bills.

How would the Clean Energy Jobs Act fix this?
States have the option to operate separate capacity markets to ensure future energy supplies will be available at a reasonable cost. The Clean Jobs Coalition, of which CUB is a member, has found that Illinois could have cleaner and cheaper electricity if we meet our capacity needs through a state auction process instead of under the expensive and unfair new federal government rules.

CEJA would have the Illinois Power Agency (IPA) manage the state’s own capacity needs. The IPA already manages the power purchases of the state’s biggest electric utilities, and part of its mission is to protect consumers from unnecessary increases in their supply costs. The agency is better positioned to run Illinois’ capacity auction and ensure that northern Illinois consumers save money while the state’s clean energy goals are advanced.

In addition to protecting customers from the FERC increase, CEJA’s capacity market provisions include a “consumer protection adjustment,” which locks in a 5 percent reduction on northern Illinois electric bills.

What else does CEJA do?
Capacity market reform is one part of the Clean Energy Jobs Act, the most comprehensive and consumer-friendly energy bill in Springfield. The legislation also:

Your ticket for the: The “largest electric increase in state history”—unless Illinois passes CEJA