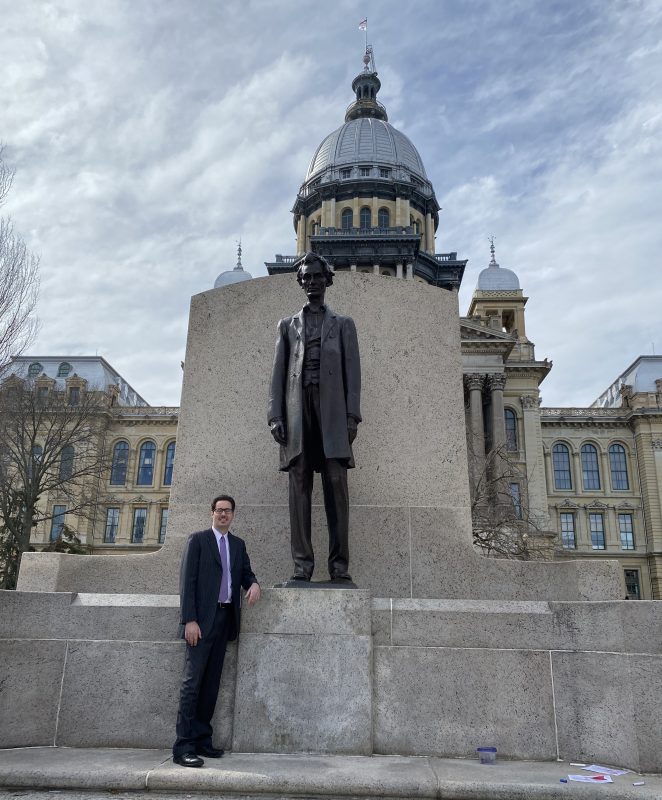 With Illinois’ new General Assembly taking up business in Springfield amid a pandemic, CUB’s Bryan McDaniel will be busy fighting for consumers on a number of important bills.

“Fighting for consumer legislation in Springfield is always a challenge because energy, water, and internet company lobbyists are out in full force and they’ll do whatever they can to protect and increase their profits,” said Bryan, CUB’s director of governmental affairs. “Sometimes it takes several legislative sessions to pass good bills. But we don’t give up, because it’s about protecting consumers.”

The following issues will be part of CUB’s pro-consumer agenda at the State Capitol. (We don’t have bill numbers for these legislative campaigns but we’ll update you as soon as we do.)

After delays caused by the pandemic and a scandal in which federal prosecutors accused ComEd of corruption, there is urgency to support CEJA.

CUB calls CEJA the most consumer-friendly energy legislation in Springfield for a number of reasons, but most importantly the legislation would protect customers from a series of Federal Energy Regulatory Commission (FERC) rulings since 2019. Those rulings have Illinois on the verge of major changes to the electricity market. The market changes would shovel consumer money to fossil fuel power plants to the tune of up to $1.7 billion in higher electric bills for most Illinois consumers over the next decade.

As a response, CEJA would put the Illinois Power Agency in charge of managing a key part of the electricity market in ComEd territory, called the capacity market, putting Illinois in control of its own clean energy policy and creating the opportunity to save consumers money while greatly expanding clean energy investment. CEJA also would:

While the legal team this year has been involved in about $400 million in rate cases before the Illinois Commerce Commission (ICC), at the State Capitol CUB is taking on a special natural gas surcharge (the “Qualified, Infrastructure Plant” charge) that, as Bryan puts it, allows Ameren, Nicor Gas and Peoples Gas “to use consumers like an ATM machine.” The parent companies of those utilities have made billions of dollars in profits over the last five years, so they’ve been very successful at taking more consumer money.

The utilities say the surcharge is necessary to pay for pipe replacement, but the companies are legally obligated to replace old pipes and respond to emergencies, and they did it for decades without slapping us with an extra charge. That’s why we’re fighting for legislation that would eliminate that surcharge and slow down reckless spending by the gas utilities.

Ameren has just received a $76 million rate hike, and Nicor has just asked for a record $293 million in higher rates. But the problem of rapidly rising gas bills is most urgent in Chicago.  (Customers in houses pay more than $30 a month just for the service—before they use any gas, under Peoples Gas rates.)  A big reason for the high bills is that consumers are on the hook for up to $11 billion in projected pipeline replacement costs. A past analysis by the Illinois Attorney General’s office estimated that gas bills could double over the next 20 years.

“Chicago is on the verge of a widespread heating-affordability crisis and other consumers across the state are hurting too,” Bryan said. “Gas companies don’t need a special surcharge to pay for pipeline costs. They should recover these costs through a traditional rate case, which would help slow down the companies’ spending spree.”

Most Illinoisans are customers of municipal water systems, but a growing problem is two major private companies—Illinois American Water and Aqua Illinois—crisscrossing the state to offer top dollar for, what are in most cases, fully depreciated water and wastewater systems. The corporations have been helped by a state law (legislation CUB opposed) that allows them to pass the cost of the purchases—more than $200 million and counting—onto their customers.

CUB is trying to bring more transparency to the process by fighting for legislation that would require municipalities to hold a referendum before they are allowed to sell a public water system to a private company.

“Shareholders get to vote for the sale of a corporation, and we look at a municipality’s residents as the shareholders of a water system,” Bryan said. “They deserve a voice.”

Bryan thanked members of the CUB Action Network for their ongoing activism on consumer protection issues.

“I never feel alone in Springfield, because I know I have thousands and thousands of Illinois residents on my side,” he said. “Thank you for the support.”