The time is ripe for the Illinois Clean Jobs Bill 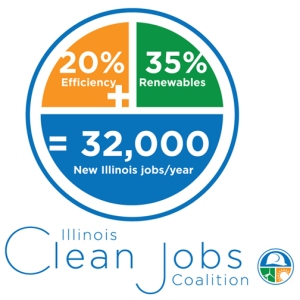 History was made earlier this week when the U.S. Environmental Protection Agency (EPA) unveiled the Clean Power Plan to reduce carbon emissions by nearly one-third by 2030. 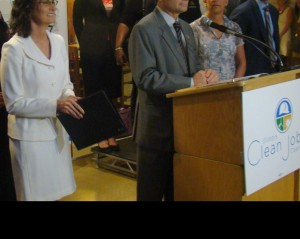 “We have a moral obligation to leave our grandchildren with cleaner air to breathe,” said U.S. Rep. Mike Quigley

Given Illinois’ individual target goal of reducing emissions by about 31 percent, the urgency of passing the Illinois Clean Jobs Bill could not be clearer.  The bill would boost the share of energy Illinois generates from renewable energy sources such as wind and solar to 35% by 2030, while doubling energy efficiency standards by 2025.

In doing so, the legislation would also generate tens of thousands of new jobs and save Illinois consumers at least $1.6 billion, according to CUB’s analysis.

“It took us a very long time to get to this day,” Illinois Attorney General Lisa Madigan said of the federal Clean Power Plan.

Attorney General Madigan emphasized the role that renewable energy and energy efficiency would play in meeting the federal goals and ensuring that energy bills are affordable for all individuals.  “Utility bills matter to everyone,” she said, and that is “especially true if you are on a low or moderate income.”

You can see more pictures from today’s conference below.

Your ticket for the: The time is ripe for the Illinois Clean Jobs Bill

The time is ripe for the Illinois Clean Jobs Bill