The fight before FERC, explained

What is capacity, and what does it mean for your ComEd bills? 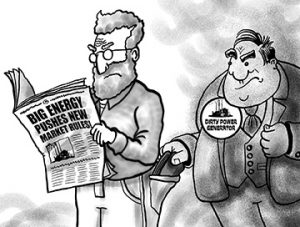 An unusual battle is shaping up before the Federal Energy Regulatory Commission (FERC), one that could undermine Illinois’ energy policy and send ComEd bills skyrocketing if out-of-state fossil-fuel generators get their way.

Specifically, they want to change the rules governing how utilities buy energy “capacity” on the electricity market that includes ComEd territory—and they need permission from FERC to do it.

We’ll try to break down this technical issue and explain what it means for your electric bills.

First, what is capacity?

Not only do you pay for the power you use now, but you also pay for power you could use in the future. Capacity refers to extra payments consumers give power plant operators for the commitment to have enough electricity available if demand suddenly spikes. (Think of a hot summer afternoon, when everyone blasts the AC.)

How does it affect my bill?

In Illinois, utilities distribute power, but they do not make it themselves; utilities are not allowed to own power plants. Instead, Illinois is a deregulated state where independent generators compete to provide utilities with electricity at the lowest cost.

Capacity, a generator’s commitment to be available when demand is high, is sold separately through an auction, in a different market. Capacity costs are embedded in the supply charges on your bill and account for roughly 21 percent of supply, according to the Illinois Commerce Commission (ICC).

Why does this particular battle only affect ComEd customers? 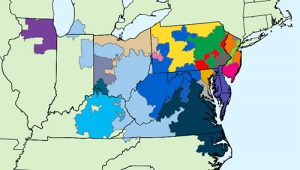 The power grid in northern Illinois is overseen by a different regional authority than the one used by central and southern Illinois. PJM Interconnection, a private, not-for-profit, regional transmission organization, manages a grid that stretches from northern Illinois across 13 states to the East Coast and includes Washington, D.C. The area served by PJM is the largest electricity market in the United States, and accounts for about 20 percent of the U.S. power supply.

Ameren customers, in central and southern Illinois, are served by a different capacity market, managed by the Midwest Independent System Operator, and for now do not face the same issues.

What are the current rules?

According to Crain’s Chicago Business, the cost of capacity has risen substantially in recent years and become a crucial source of revenue for power plant owners. (By the way, alternative energy suppliers as well as ComEd buy electricity on this market. So you won’t escape capacity charges by changing suppliers.)

However, fossil fuel generators don’t like FEJA because it cuts into profits for their aging power plants.

How do generators want to change the rules?

Big out-of-state corporations that own fossil-fuel generators want PJM to change the capacity auction rules to offset incentives promised through state legislation like FEJA and ensure profits for themselves. Offsetting those incentives to benefit fossil fuels would force consumers to pay for extra, unneeded capacity, at inflated prices. The result is essentially a giveaway of billions of consumer dollars to a handful of fossil-fuel generators.

It would also undermine states’ efforts to set their own clean energy policy. Of the 13 states and Washington, D.C., in the PJM market, 12 have a stake in renewable energy.

When will FERC decide if it will approve the rules?

In March, PJM brought two proposals to FERC to change the capacity market. CUB opposed both, arguing they would subsidize some of the market’s most expensive generators at significant cost to consumers. In June, FERC sided with the generators but rejected both plans, saying PJM needed to rework some of the ideas and present a new plan. But PJM’s new proposal, in October, was even worse.

An independent market monitor estimated that PJM’s plan would cost consumers across the grid up to $8 billion a year. In response, CUB submitted comments to FERC on behalf of Illinois consumers. A final FERC ruling is expected in January.

CUB will challenge any negative ruling in court, but don’t expect the fight to end there. This dispute could easily spill into the Illinois General Assembly, where consumer advocates could push for the state to institute its own capacity-related reforms. Stay tuned.

What can I do?

Sign the petition, and join CUB’s Action Network to get updates and opportunities to advocate for lower bills.

Your ticket for the: The fight before FERC, explained

The fight before FERC, explained