The forecast is sunny for La Grange principal’s electric bills 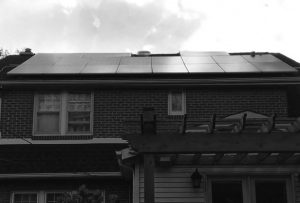 When Tim Sheldon moved to La Grange from a multi-unit building in Chicago two years ago, he finally got the opportunity to install solar panels, something he had been interested in for years.

“In one hour the sun showers us with enough energy to power us for a year, we just don’t harness it,” the elementary school principal told CUB.

His installation on the back of his roof, which faces east, has been up and running since October of last year. It comprises 19 300-watt panels for 5.7 kilowatts (kW) of power, which covers about 100 percent of his family’s energy needs.

Sheldon expects the solar installation to be on his roof for 25 years, but he figures it will pay for itself in only 5 to 7 years,  so “everything after that is free money.” 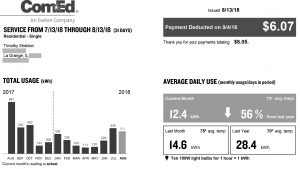 One of Sheldon’s summer ComEd bills came out to just $6, thanks to his solar panels and energy efficiency.

Sheldon is still a ComEd customer, and pays a customer charge like everyone else. But he has net metering, which means he only pays for any power he pulls from the grid above and beyond the power his panels added to the grid. Net metering works like rollover minutes on your mobile phone, Sheldon says. In summer his panels produce three to four times more than in the winter, so the power he put onto the grid in July goes toward his winter electric bills. In effect, he can run his meter backward.

If that sounds complicated, don’t worry. Installing rooftop solar involves getting bids just like any other home improvement project. Just as a contractor putting an addition onto your house includes things like permitting into the bid, a solar contractor will also handle connecting the panels to the grid and setting up net metering for you.

“It cost about $15,000, which sounds like a lot, but it’s money I’d be paying anyway from the standpoint of paying my electric bill,” he said. The substantial state and federal incentives reduced his cost from $15,000 down to $5,000, he said, and net metering helps cover the rest.

Sheldon says that even people who don’t have $15,000 to pay up front can still benefit from solar, either by working out a payment plan with the solar company, leasing the panels, or participating in Community Solar.

Another benefit is that rooftop solar increases the value of your home without increasing your property tax. In July 2017, Chicago magazine cited two studies showing that solar panels add value to homes. One study, by the Appraisal Institute and the U.S. Department of Energy, found an added value of almost $3,800 for every kilowatt of solar panels.

“It makes not only environmental sense, but economic sense,” Sheldon said.

Your ticket for the: The forecast is sunny for La Grange principal’s electric bills

The forecast is sunny for La Grange principal’s electric bills