CUB honored by gift in memory of Chris Conrad 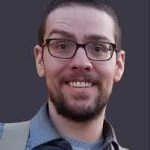 As the Citizens Utility Board (CUB) celebrates its 35th anniversary, we are honored to receive a generous gift from the Chris Conrad Memorial Light-the-Way Fund.

The $20,000 gift honors Chris Conrad’s lifelong passion for shining a light on inequity and injustice. We will use the fund to further CUB’s mission to cut utility bills and work for policies that are good for the planet and consumer pocketbooks. A portion of the donation will help provide energy-efficient lightbulbs to people who participate in hundreds of grassroots events CUB staffs across Illinois.

Chris’ family first heard about CUB through Jeff Zethmayr, our director of research and the man behind the cutting-edge papers we’ve done on Earth-friendly power-pricing plans and electric vehicles. Jeff is friends with Chris’ brother, Will Conrad, and sister-in-law, Jess Hasken. That’s how the two became familiar with CUB’s track record of reducing utility bills by more than $20 billion over the last 35 years.

“CUB’s mission of doing good in Illinois aligns with the kind of person Chris was,” Jess Hasken said. “The ‘Light The Way Fund’ honors his passion for the environment and social justice by giving out money-saving lightbulbs and encouraging people to support CUB’s work for cleaner, more affordable energy.”

Friends and family remember Chris, who died at 32 last May, as a kind man and a relentless seeker of knowledge who cared deeply about the world. His passion to find a role that would do the most good spurred him to explore fields as diverse as atmospheric science and nursing. And his boundless energy overflowed into the arts—Chris was a prolific painter and composer.

“My brother had this deep sensitivity to anyone who was suffering,” Will said. “If you ever had a conversation with him, he listened intently and made you feel like you were the most important person in the conversation.” 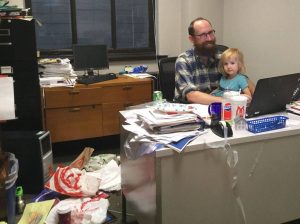 CUB’s Jeff Zethmayr, here with his daughter, Tova, remembers Chris Conrad’s kind heart and intelligence. “There was almost no subject matter that Chris couldn’t talk about in deep, considered detail,” he said.

Jeff first met Chris about 10 years ago in Seattle, where the CUB staffer was a grassroots organizer and Will’s roommate. Chris had flown to Seattle to visit his brother, and Jeff picked him up at the airport. The first meeting was memorable—Chris talked with Jeff like they were old friends, and when they arrived at the apartment he promptly washed his waist-length hair in the kitchen sink.

“There was almost no subject matter that Chris couldn’t talk about in deep, considered detail,” Jeff remembers. “There’s a way that some people stay child-like, where they never get cynical, never stop seeing unfair things as unacceptable, and also never get self-conscious about the way people see them and their eccentricities. That was Chris.”

Will and Jess said they see this gift to CUB as a way to embody Chris’ passion, energy and care for the world.

“We will always love Chris, and we miss him dearly,” Jess Hasken said. “But our sadness is eased a bit by the hope that our gift to CUB in Chris’ memory will spark a passion in other people. Chris would have loved the fact that he was helping lead the movement for an affordable, clean energy future.”

If you would like to make a donation to CUB in Chris’ memory, please click here: The Chris Conrad Memorial Light-the-Way Fund.

Your ticket for the: CUB honored by gift in memory of Chris Conrad

CUB honored by gift in memory of Chris Conrad