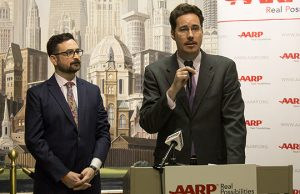 CUB’s Bryan McDaniel (right) at a news conference this year called on Peoples Gas to rein in the reckless spending in its pipeline-replacement program.

The Illinois Commerce Commission (ICC) has announced that Peoples Gas has agreed to give about $7.2 million back to its customers in connection with a review of the 2015 costs of the utility’s troubled pipeline-replacement program.

This is the result of a settlement involving the utility and the staff of the ICC, the Illinois Attorney General’s Office and CUB.

“Peoples Gas has agreed to give $7 million back to customers in the face of strong allegations of mismanagement and imprudence related to the 2015 costs of its pipe-replacement program,” CUB Communications Director Jim Chilsen said.

An ICC news release broke down the $7.2 million:

Peoples Gas is in the middle of a pipeline-replacement program slated to last until 2035-2040. A 2013 state law allows gas utilities to impose a surcharge on customers to recover the costs of replacing aging natural gas pipeline infrastructure, upgrading systems and moving customer meters outside of homes for easier inspections. Under the law, state regulators conduct an after-the-fact yearly review of the company’s costs related to this work, and can issue refunds if they identify imprudent spending. The settlement is the result of this process for 2015 costs.

These yearly prudence reviews are behind because of delays after an ICC-ordered audit in 2015 uncovered widespread mismanagement in the program. Since then, the projected costs of the program have risen from $4.5 billion to as high as nearly $11 billion. “CUB’s legal team will continue to work hard to uncover Peoples Gas’ waste and mismanagement in the yearly reconciliation cases to secure the most significant consumer benefits possible,” Chilsen said.

But consumer advocates believe a lot more needs to be done, or the program could help double gas bills over the next 20 years. “This is a program that’s out of control,” CUB Executive Director David Kolata told Fox Chicago’s Mike Flannery.

That’s why CUB, AARP Illinois and Illinois PIRG have pushed for House Bill 3044, which would rein in the utility’s out-of-control spending before it sparks a heating-affordability crisis in Chicago. A Chicago City Council committee recently passed a resolution calling on state leaders to act.

Your ticket for the: We like headlines like this: “Regulators order Peoples Gas to repay $7.2 million to customers”