Why is Peoples Gas giving $7 million back to customers? 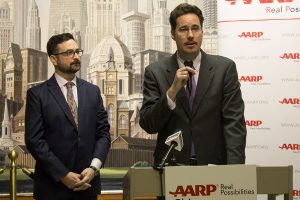 The Illinois Commerce Commission (ICC) announced in July that Peoples Gas has agreed to give about $7.2 million back to its customers.

Why is Peoples Gas giving money back to consumers?

It’s connected to a review of 2015 costs of the utility’s troubled pipeline-replacement program, called the System Modernization Program, or SMP. The $7.2 million is part of a settlement involving the utility and the staff of the ICC, the Illinois Attorney General’s Office and CUB. “Peoples Gas has agreed to give $7 million back to customers in the face of strong allegations of mismanagement and imprudence related to the 2015 costs of its pipe-replacement program,” CUB said when the refund was announced. A little background:

The SMP, slated to last until 2035-40, aims to replace 2,000 miles of gas mains under Chicago. A 2013 state law allows gas utilities to impose a surcharge on customers to recover some of the costs of replacing aging natural gas pipeline infrastructure, upgrading systems and moving customer meters outside of homes for easier inspections. On Peoples Gas bills it’s called the “Qualifying Infrastructure Plant Surcharge.”

Under the law, state regulators conduct an after-the-fact yearly review of a gas company’s costs related to this work, and can issue refunds if they identify imprudent spending. The settlement is the result of this process for 2015 costs.

According to the final ICC order in the case, the staff of the ICC, the Attorney General’s Office and CUB identified several examples of costs that were imprudently incurred. That included costs related to an outside contractor hired to manage the pipeline project even though evidence of mismanagement and major cost overruns made clear that Peoples should have moved the project management in-house. Also, payments were made to another contractor that had received a negative performance evaluation. The AG’s office and CUB recommended that the ICC direct Peoples Gas to strengthen its project-management and cost-control procedures to resolve identified weaknesses and deficiencies.

How much money will I get?

An ICC news release broke down the $7.2 million:

*Regarding the $3.5 million reconnection fund:

How will the refund appear on my bill?

The one-time credit—which Peoples Gas estimates will average about $4—will appear as a separate line item on bills. It will be labelled: “2015 SMP Adjustment.” Bills will also contain this message: “This bill reflects a credit from an agreed-upon settlement between Peoples Gas and the Illinois Commerce Commission, Illinois Attorney General, and Citizens Utility Board regarding the Peoples Gas System Modernization Program.”

Do all customers get this credit?

The credit will be applied to the bills of all current customers.

When will it appear on my bills?

When the refund was announced in mid-July Peoples Gas said it would appear within the next 90 days. So we expect to see it sometime before mid-October.

Why did the ICC just finish its review of 2015 costs?

The yearly prudence reviews are behind schedule because of delays after an ICC-ordered audit in 2015 uncovered widespread mismanagement in the program. Since then, the projected costs of the program have risen from $4.5 billion to as high as nearly $11 billion. CUB’s legal team will continue to work to uncover Peoples Gas’ waste and mismanagement in the yearly reconciliation cases to secure the most significant consumer benefits possible. (Note: In 2018, CUB helped secure a $2.3 million credit for Peoples Gas customers, in connection with 2014 costs.)

CUB will strive to secure the largest consumer refunds possible before the ICC in these yearly reviews. CUB also is pushing for the General Assembly to pass legislation to rein in the utility’s reckless spending, because we are concerned it will spark a heating-affordability crisis in Chicago.

Your ticket for the: Why is Peoples Gas giving $7 million back to customers?

Why is Peoples Gas giving $7 million back to customers?