The Solarize Chicagoland program surpassed its goals this summer, achieving commitments to install nearly 1,000 kilowatts (kW) of solar on 135 properties in the Chicago area. The Citizens Utility Board (CUB) and Midwest Renewable Energy Association (MREA) launched this solar group-buy program in April, and the program’s participation deadline was Sept. 30.

In their first year of operation, Solarize Chicagoland’s newly-installed solar arrays will offset emissions equivalent to approximately 800,000 pounds of coal burned. Collectively, customers will also save an estimated $98,300 in electric bills in the first year alone. 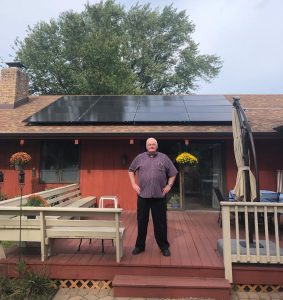 Ken and Pat Groenewold were among the first to have a new solar energy system installed by GRNE Solar as part of the program. Their system is composed of 28 solar panels, each 310-Watts, for a total of 8.68 kilowatts of solar power.

“I really wanted to wait for this program, and I’m glad that I did,” said Ken, who attended the first Solarize Chicagoland presentation back in April. “My savings will be about $1,500 a year, so after incentives, the solar panels will pay for themselves in about four years.”

Solarize Chicagoland used the power of volume purchasing to make solar more accessible and affordable for home, business and farm owners in Cook, DuPage, Kane and Will Counties. It also educated consumers about Illinois Shines, new state solar incentives that have become available for consumers this year.

“At CUB, we are very excited about Illinois Shines, but we know that with all the new buzz around solar, it can be confusing to figure out what’s best for you,” said Christina Uzzo, CUB Environmental Outreach Coordinator.

“The presentations provided folks with the information they needed to determine whether solar is right for them,” said Peter Murphy, Solar Program Director for the MREA. “Partnering with CUB was instrumental to the program’s success because they were able to turn out a huge number of people to the presentations.”

“We hope that these 135 new solar arrays can serve as landmarks to the affordability, feasibility, and overall common sense of adopting solar quickly here in Illinois,” Uzzo said.

Your ticket for the: Solarize Chicagoland surpasses summer goals, will install 135 solar arrays