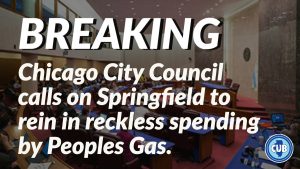 The resolution, passed on Friday, calls on Gov. J.B. Pritzker and the Illinois General Assembly “to restore necessary oversight of this troubled program, and take adequate action to protect Peoples Gas customers and the public interest.” This story goes beyond Chicago because it’s a positive development for legislation consumer advocates have been pushing that would “restore necessary oversight” for all major gas utilities in Illinois.

Illinois PIRG, AARP Illinois and the Citizens Utility Board (CUB) applauded the City Council’s move. Those groups warn that Chicago could be headed for a widespread heating-affordability crisis if something is not done to reform the mismanaged Peoples Gas System Modernization Program. The controversial program, funded by the utility’s customers, is replacing aging cast-iron gas pipes underneath the city.

In 2013, the General Assembly allowed gas utilities in the state (Peoples, Nicor and Ameren Illinois) to add the Qualified Infrastructure Plant, or QIP, surcharge to consumer bills to more quickly recover pipe-replacement and other infrastructure costs by side-stepping the regulatory process and automatically raising heating bills.

Consumer advocates support the Heating Affordability & Utility Accountability Act (HB 5247/SB 3497). It would end the surcharge effective Jan. 1, 2021, and increase oversight on utility spending. Everyone agrees pipes should be replaced, but consumer advocates point out that the utilities have done such work for decades without hitting customers with a surcharge.

The Peoples Gas program has been accused of mismanagement for years. One review showed projected pipe-replacement costs had skyrocketed from about $2 billion to $11 billion—and an analysis by the Illinois Attorney General’s office estimated that gas bills could double over the next 20 years.

Many customers are already having a hard time affording their bills: Peoples Gas reportedly saw a jump of more than  60 percent in the amount of uncollectible bills in 2019. But the QIP charge keeps going up. Last year, customers reportedly paid an average of $107 on the fee (up $30 from 2018).

Your ticket for the: Chicago resolution calls out excessive spending by Peoples Gas