A new poll shows that 8 in 10 Illinois voters support the Clean Energy Jobs Act (CEJA), comprehensive renewable energy legislation that would protect our power bills and create thousands of well-paying jobs as Illinois faces the worst economic downturn since the Great Depression.

“The poll results are overwhelmingly positive—82% of Illinoisans support the Clean Energy Jobs Act,” CUB Executive Director David Kolata said. “CUB likes CEJA because it protects our pocketbooks and the planet. It will be a key component of any economic recovery plan.” 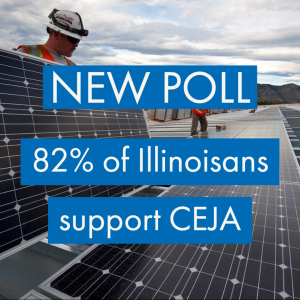 The poll, conducted by the Global Strategy Group, surveyed Illinois residents from May 18-21 on their support for CEJA. The clean energy legislation would also electrify the mass transit and transportation sector, cut carbon from the power sector and require that thousands of clean energy jobs created by the bill be prioritized in disadvantaged communities and former coal plant communities. The bill currently has 55 sponsors in the state House and 31 sponsors in the Senate.

Strong majorities support CEJA across party lines, winning near total support from Democrats (98%) and Independents (84%)—nearly 6 in 10 Republicans (58%) support CEJA at the outset.

CEJA gains support of more than seven in 10 voters in every region, peaking at 93% support in the City of Chicago, 85% in suburban Cook County, 80% in the collar counties, 71% in northern and central Illinois and 76% support in southern Illinois. In addition, 85% of labor households support the bill.

As Illinois grapples with the unprecedented challenges and job losses from the COVID-19 pandemic, the poll shows that a vast majority of Illinois residents support CEJA because it can unlock tens of millions of dollars in private investment and creates thousands of clean energy jobs without raising taxes or spending scarce state revenue.

CEJA would not only boost Illinois’ post-COVID economic recovery, but it also serves as a shield against an impending and unprecedented electric rate increase for the state. In December 2019, the Federal Energy Regulatory Commission (FERC) revamped the rules governing a special electricity market, effectively raising Illinois power bills by hundreds of millions a year to bail out failing dirty power plants. FERC’s decision makes consumers pay for dirty energy we don’t need. But CEJA allows Illinois to circumvent the new federal regulation, stop the electricity bill increases, and lower consumers’ bills in the process.

Your ticket for the: New Poll Shows Statewide Support for CEJA