What is environmental racism?

Environmental racism is a term that was first coined in 1982 by Dr. Benjamin Franklin Chavis Jr., a Black civil rights leader. It refers to environmental injustices that harm communities of color.

Everyone deserves equal access to clean air, water and safe neighborhoods, but not everyone is given this guarantee. The Environmental Protection Agency reported that people of color are much more likely to live near polluters and deal with its harmful effects. That means coal plants, toxic waste sites and landfills are more likely to be placed near neighborhoods where Black and Indigenous people and people of color live. 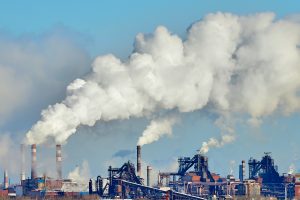 Policies and legislation have historically affected communities of color differently than their white counterparts. For example, the water crisis in Flint, Michigan disproportionately affected the Black community. (Flint is an Environmental Justice (EJ) community, which refers to communities that are regularly exposed to harmful pollution.)

In 2014, the city switched its drinking water supply from Detroit’s system to the Flint River. Inadequate treatment and testing of the water resulted in major water quality and health issues, including heart disease, kidney disease and even reduced fertility. The Michigan Civil Rights Commission found that the poor governmental response to the Flint crisis was a “result of systemic racism.”

Environmental racism also takes place on a global scale. For example, while countries in the Global North benefit from technological advancements, the production and disposal processes are typically done in the Global South, which has to deal with the hazardous aftermath.

Since the 1970s, large amounts of foreign electronic waste have been imported to countries in Southeast Asia and West Africa, mostly from the United States and Europe, due to lax environmental laws and cheaper labor.

China, Ghana, India, Pakistan, Nigeria and other countries in the Global South that deal with e-waste imports suffer from serious public health issues due to toxic chemicals leaking into the air, water and soil—including lead poisoning, lung damage, birth defects and more. Reports show that nearly 80 percent of children near China’s e-waste sites suffer from lead poisoning, while the air and land pollution have destroyed the farmers’ livelihoods.

Environmental racism is still prevalent today, and we must continue to address these issues in any policy or legislation.

What can you do? Fight for better policy. Illinois’ proposed Clean Energy Jobs Act (CEJA), for example, would put the communities most impacted by dirty energy first by prioritizing them in clean energy workforce development initiatives.

We must continue to fight for better policies that secure clean, affordable energy because of the way that environmental injustices disproportionately affect people of color.

Your ticket for the: What is environmental racism?

What is environmental racism?