The Solarize Chicagoland program surpassed its goals this summer, achieving commitments to install more than 580 kilowatts (kW) of solar on 80 properties in the Chicago area. The Citizens Utility Board (CUB) and Midwest Renewable Energy Association (MREA) launched this solar group buy program in April, and the program’s participation deadline was September 30. Windfree Solar, based in Chicago, was selected through a competitive process as solar installer for program participants. 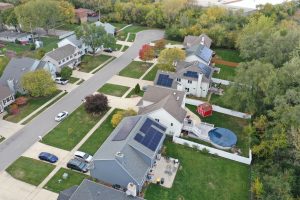 In their first year of operation, Solarize Chicagoland’s newly-installed solar arrays will offset emissions equivalent to approximately 550,000 pounds of coal burned. Collectively, customers will also save an estimated $79,000 in electric bills in the first year alone.

“Over the last couple years my husband and I have really been thinking about our energy usage. When we first moved into the house we installed a smart thermostat, last year we bought an electric vehicle,” said Chicago resident and participant, Katie Aquino. “The fact that Windfree was a local company taking part in a local program was a selling point when we were deciding which company to go with.”

Solarize Chicagoland used the power of volume purchasing to make solar more accessible and affordable for home, business and farm owners in Cook, DuPage, Kane and Will Counties. The 2020 program builds on last year’s successful program, which resulted in new solar systems on 124 properties.

“When the program launched this year, we didn’t know exactly what it would look like. While the solar industry experienced a slow down earlier this year due to COVID, unfortunately many things, like the phasing out of the federal solar tax credit, are not put on hold. We are happy that we could modify the program, make it virtual, and still get solar information out to so many homeowners in the Chicago area,” said Christina Uzzo, CUB Environmental Outreach Coordinator.

Oak Park resident Eric Otto had looked into going solar two years ago, and the group buy pricing made it possible for him to make the switch this year. “Over the long term, the financial benefits are a no-brainer, but the environmental benefits also interest us. From day one when you turn it on, we really like the idea of getting our energy from a renewable source. That was really appealing to us,” said Otto.

“The presentations provided folks with the information they needed to determine whether solar is right for them,” said Peter Murphy, Solar Program Director for the MREA. “Our goal, and CUB has been very helpful to achieve it, is to provide clear and thorough consumer education, and couple that information with a purchasing opportunity at a lower-than-market rate.”

“At Windfree, it has always been our mission to educate our community and future leaders about renewable energy, going green, and going solar. Solarize Chicagoland assisted greatly in our ability to reach a greater volume of people who are like-minded,” said Adam Perri, head of project development at Windfree Solar. “Especially in the height of the global pandemic we are experiencing, it has been integral to have the ability to reach a large group of people that have been educated about how solar works.”

Your ticket for the: Solarize Chicagoland to Install 80 Solar Arrays