UPDATE:  Early this morning, the Illinois Senate passed comprehensive clean energy legislation (Senate Bill 18) and sent it to the state House of Representatives. (The vote was 39-16-2.) That came after days of negotiations and two hearings by the Senate Committee on Energy and Public Utilities.

While there is broad agreement on most of the provisions in the bill, there are still key issues that will have to be resolved in the House of Representatives, including the process for closing coal-fired power plants by 2045. CUB will update you when we know when the House is scheduled to take up the matter. In the meantime, the various parties say they’re ready to work with the House to pass legislation.  Read the statement from the Illinois Clean Jobs Coalition.
We appreciate all the CUB supporters who have sent thousands of messages to the General Assembly in favor of strong, pro-consumer energy legislation. We know it’s been a long haul–more than two years of hard work. We’re closer than we’ve ever been, and we’re not giving up.

In what could be one of the most important weeks in the history of Illinois energy policy, legislative leaders in Springfield are working to pass a comprehensive energy bill before the end of August. The question is: Will CUB and other advocates be able to achieve legislation that’s good for the planet and Illinois consumers? 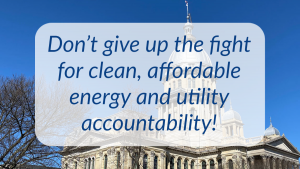 CUB supports a sweeping proposal by Gov. J.B. Pritzker that would contain historic provisions to hold utilities accountable, help communities most hurt by pollution enjoy the benefits of clean energy jobs, close dirty power plants by 2045 and move Illinois to 100 percent clean energy. At the beginning of the month, consumer and environmental advocates and labor leaders were at an impasse—mainly over a schedule to close coal-fired power plants.

Although some progress has been made since then, the schedule to close power plants is still a sticking point, and the governor and consumer and environmental advocates opposed the first legislative proposal that was filed on Aug. 30. The hope is that Springfield can still pass strong, pro-consumer legislation before the end of August—which is midnight tonight.

The stakes are high for a number of reasons:

Although these problems require urgent action, several times—May 31, mid-June and earlier in August—consumer and environmental advocates have been stopped by fossil fuel interests that want coal-fired power plants to stay open indefinitely.

But while the window is closing fast, there’s still an opportunity to pass the governor’s proposal by the end of the month. “Folks, we’ve got some work to do, but we’re about 97% of the way there, and it’s because of all of you that we’re gonna get over the finish line,” Gov. Pritzker said at a recent State Fair rally organized by members of the Illinois Clean Jobs Coalition.

The governor’s proposal would be a national leader for helping communities that have suffered the most from fossil fuels—including Black and Brown communities, lower-income towns and those abandoned by the coal industry—make the transition to a clean energy economy. That means more clean energy businesses and jobs—which is exactly what the state needs to help recover from the pandemic. In addition to those important provisions, there are a lot of other pro-consumer planks that CUB supports.

As CUB has said before, the consumer watchdog is fighting for legislation that would:

Your ticket for the: CUB, other advocates race against clock: General Assembly tries one more time to pass strong clean energy bill