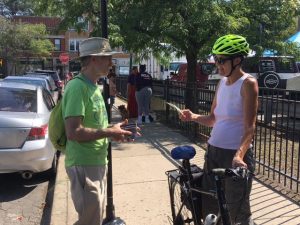 Mark speaks to a consumer about community solar at the Lincoln Square farmers market over the summer.

It was a hot summer day, and Mark Kraemer was promoting Illinois’ community solar program at a farmers market. “Would you be interested in seeing more clean and renewable energy in Illinois?” asked the friendly, soft-spoken CUB volunteer.

“No thank you,” said some, hurrying past. One waved her hand and shook her head dismissively. Another joked, “No, I love dirty energy.” But he got through to a lot of other people who took a flyer from the CUB guy wearing a wide-brimmed khaki hat and a green shirt proclaiming: “Clean air. Energy. Jobs. FOR ALL.”

“Sounds great,” one person said. “Oh awesome,” said another. CUB supports community solar, Mark told anybody who would listen “because it’s good for the environment but it also saves consumers money.”  (See a video of Mark in action.)

Community solar helps people cut their power bills by subscribing to a portion of the energy produced by large, off-site solar projects. It allows people to enjoy the benefits of solar power without having to install panels.

When he’s not playing bass for the Chicago Symphony Orchestra, Mark has been one of CUB’s best volunteers. By late summer, he was on track to distribute 1,000 CUB flyers on community solar.

“I believe in CUB’s mission—keeping utilities affordable for ordinary folks,” said Mark, 67, of Wilmette. “But I also feel that protecting the environment is fundamental to CUB’s mission. It makes me want to support CUB’s work.”

“Mark was a tremendous help this summer,” said Program Coordinator Matt Harvey, the driving force behind CUB’s first-ever volunteer team. “His passion for clean energy comes out in his hard work and eagerness to spread the word about community solar.”

Mark started volunteering at CUB in the spring, impressed by SolarInTheCommunity.com, the group’s community solar website. Community solar helps people cut their power bills by subscribing to a portion of the energy produced by large, off-site solar projects.

On that hot summer morning at the market, Mark told people who stopped to listen that he’s saved about $60 with community solar: “I’ve been a subscriber for about a year and I really love it,” said the volunteer, as he handed out one more CUB flyer.

After a few hours, Mark had handed out 50 flyers–not a bad day. “I feel like I’m helping to clean our environment by promoting cleaner sources of energy,” he said.

Learn more about volunteering at CUB.

Your ticket for the: Making A Difference: Chicago Symphony bassist helps CUB talk up solar power