Not without a fight: Sign a petition to save your Internet 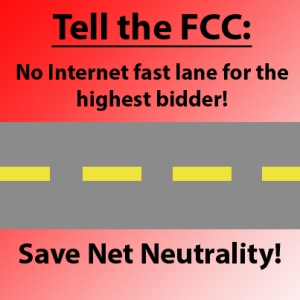 The Federal Communications Commission (FCC) has revealed a troubling net neutrality plan that could divide Internet traffic into a “fast lane” and “slow lane” depending on how much cash companies fork over.

The plan has struck a nerve with CUB Action Network members, who sent more than 3,100 messages to the FCC earlier this month, and added about 600 signatures to a CUB petition drive just this week.

There are signs that the pressure is working. Two out of the three yes votes from the FCC expressed reservations about the plan. And Commissioner Mignon Clyburn issued a call to action, actually requesting more messages from consumers during the FCC’s four-month open-comment period on the new rules.

So why should you sign CUB’s petition demanding the FCC reject the proposal?

Net neutrality is the principle that Internet Service Providers (ISP) should provide consumers equal access to all web content.  The FCC’s proposed rules would open the door for ISPs to give privileged status to traffic from website companies that pay more, creating an Internet that is open to the highest bidder.  Not only would this squash competition, by hurting smaller businesses that don’t pay more, but consumers would eventually face higher prices as big companies pass down the costs they are paying for faster traffic.  Faster speed for Amazon or Netflix = higher prices for you.

Add your voice to the army of consumers across the country who are demanding that the FCC protect the free and open Internet!

Your ticket for the: Not without a fight: Sign a petition to save your Internet

Not without a fight: Sign a petition to save your Internet