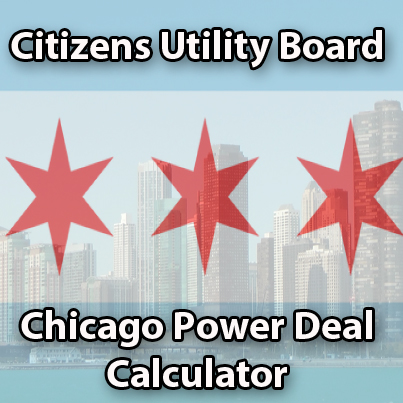 City’s power deal with Integrys Energy Services, or switch back to ComEd.

Try the free tool at: www.ChicagoPowerCalculator.com.

Chicagoans might be surprised when they open their June power bills. They’ll see new charges. Here’s a little history:

Back in 2012, most Chicago households—some 700,000—were switched to Integrys Energy Services as part of a “municipal aggregation” deal the City had negotiated.

Like other aggregation programs at the time, the City crafted a deal (at roughly 5.5 cents per kilowatt-hour) that saved all Chicagoans money. (More than $30 million, or about $42 per customer over the first 16 months of the offer.)

But then the market changed, and, as of this past June, the Integrys deal changed also. Here’s the new deal that will be reflected on electric bills from June 2014 though May 2015:

The per-kWh rate is extremely low, compared with ComEd’s summer rate of 7.596 cents per kWh. However, the monthly fees are the big change in the final year of the deal. City officials say those fees represent a more fair way of allocating certain costs that are usually wrapped into our electric bills. The way those costs are normally allocated to customers is particularly hard on apartment dwellers and condo owners–and there are a lot of those types of homes in Chicago.

The big question for the last year of the deal is: Will I add to the savings I’ve already gained with Integrys, or should I switch back to ComEd? It all depends on your usage–and that’s why we created www.ChicagoPowerCalculator.com.

Just get your latest ComEd bill, which should list your usage for the past year, and follow the simply steps in the calculator. Input an estimate of your monthly electricity usage and pick your housing type (single-family or apartment/condo). The tool will calculate what you would pay for electricity with ComEd versus Integrys. (The calculator also has an FAQ button.)

If you determine you will not save money in the final year of the deal, you can switch back to ComEd at any time without paying an exit fee. To switch, call the Integrys Hotline, at 1-888-802-2885.

Tell your Chicago friends about the calculator!

Your ticket for the: Free tool helps Chicagoans make big decision: Stay with Integrys or go back to ComEd