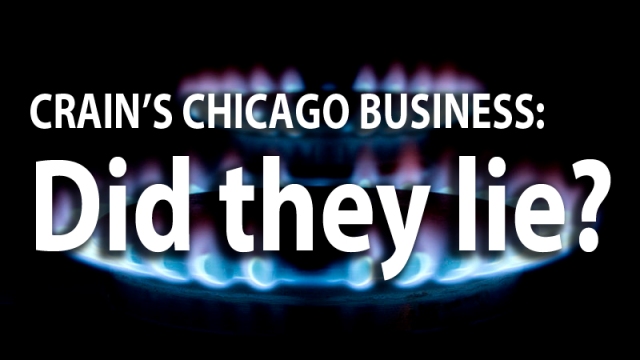 A new auditor’s report shows that Peoples Gas knew the estimated cost for a disastrous pipeline replacement project had spiked to $8 billion…but the company kept that detail close to the vest as it sought approval for a lucrative merger, according to Crain’s Chicago Business.

In June, Wisconsin Energy won Illinois Commerce Commission (ICC) approval of its $5.7 billion buyout of Integrys Energy Group, the parent company of Peoples Gas. Later, the utility revealed that its estimated cost for the Accelerated Main Replacement Project (AMRP) had ballooned to more than $8 billion, from a previous estimate of $4.5 billion.

However, a new audit report by Liberty Consulting Group shows that Peoples Gas was aware of that estimate in January—and waited to reveal it until after the sale was finalized, Crain’s reports.

“I voted against this merger because it was obvious to me the company’s strategy was to keep information from the commission,” ICC commissioner Miguel del Valle said in an email to Crain’s. “I’m deeply concerned that while Liberty questions whether this multibillion-dollar program has adequate structure, Chicago ratepayers continue to pay for it each month.”

At the time of the merger, Peoples executives assured regulators that they could not yet provide an updated cost estimate for the program to replace 2,000 miles of old Chicago pipelines, stating that they were developing a new cost model.  The revelations from Liberty’s audit report throw that explanation into question.

“Having reviewed the Liberty AMRP first quarterly report,” the ICC said in a statement, “the commission is working with Liberty Consulting Group to determine what, if any, information concerning an updated AMRP cost estimate was available to (Integrys and Wisconsin Energy) before the commission approved the acquisition.”

Peoples is set to present new cost estimates to the ICC in November.  Then, we will see if adjustments are made to the schedule and scope of the project, as auditors recommended, or whether Peoples could potentially face any consequences for its actions.

For its part, CUB will do everything it can to push for refunds for customers. “Illinois ratepayers can’t afford to foot the bill for their gas company’s mistakes,” CUB said in a statement when the merger was approved.

Your ticket for the: Crain’s Chicago Business: Did Peoples Gas lie?