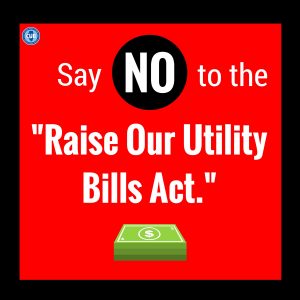 New legislation was introduced in Washington this month that would kill efficiency standards and potentially hit Americans with billions of dollars in higher utility costs.

H.R. 117 is called the “Energy Efficiency Free Market Act of 2017,” but a better name would be the “Raise Our Utility Bills Act.”

The radical bill, which was introduced by Texas Rep. Michael Burgess, would kill energy efficiency standards for appliances, such as washers, microwaves and refrigerators.

Specifically, the bill would prohibit state or federal agencies from adopting or implementing “any requirement to comply with a standard for energy conservation or water efficiency” with respect to an appliance.

These standards have helped saved consumers billions of dollars a year—because we know plenty of people on both sides of the political spectrum who agree that the cheapest energy is the energy we don’t use.

That’s why CUB put out a statewide alert, asking people to stand up for lower bills and defeat H.R. 117.

Your ticket for the: Stop: The “Raise Our Utility Bills Act”