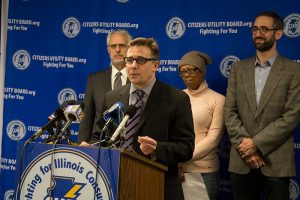 CUB’s Jim Chilsen stood with AARP Illinois, Illinois PIRG, Rep. Will Guzzardi and Sherry Henry, a Chicago gas customer, to fight for House Bill 4898, a bill that would begin to fix the Peoples Gas pipeline-replacement program. Chilsen said at Monday’s news conference: “If we don’t take steps to fix the Peoples Gas pipe-replacement program it could be a financial disaster for Chicago gas customers.”

CUB, AARP Illinois and Illinois PIRG this week held a news conference about the mismanagement and spiraling costs associated with a Peoples Gas plan to replace aging pipes underneath the city.

How bad is it? An analysis by Illinois Attorney General Lisa Madigan found that if the program isn’t changed the average gas bill could double over the next 20 years! Meanwhile, the parent company of Peoples Gas raked in more than $1 billion in profits in 2017.

But consumer advocates are fighting back. We’re pushing legislation, House Bill 4898, sponsored by state Rep. Will Guzzardi, that would help fix this mess.

Of course, Peoples Gas HATES this bill and is doing everything to kill it. So we need your help.

See the coverage we received this week:

Your ticket for the: Stop spending abuses by Peoples Gas: Fight for HB 4898