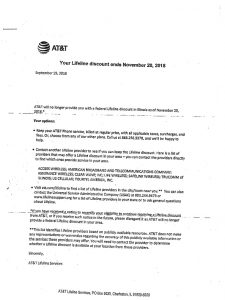 CUB has been getting calls from AT&T customers concerned about a letter they received from the company announcing the end of a low-income discount on landline service. Read CUB’s Q & A.

What happened?
In September, certain AT&T landline customers received a letter from the company with the headline: “Your Lifeline discount ends November 20, 2018.” The federal Lifeline program offers a monthly credit of up to $11.75 for qualifying low-income customers who apply. It appears in the “Plans and Services” section of qualifying bills as the “Lifeline Discount.”

What are their options?
AT&T’s letter outlines the choices for customers: Stay with AT&T landline service, but without the credit, or seek another carrier with a different type of service that does still participate in the Lifeline program. (See “What should I do if I’m an AT&T Lifeline recipient?”)

How is AT&T allowed to end the Lifeline discount on landline bills?
Earlier this year, AT&T filed a request before the Illinois Commerce Commission (ICC) to stop offering the Lifeline credit in most areas of Illinois, and received the green light over the summer. That’s because federal law sets a low bar, saying state regulators shall permit a company to end the credit if it can show that at least one other carrier provides the discount.

I thought AT&T was ending traditional landline service in Illinois?
In 2017, the Illinois General Assembly voted, over CUB’s opposition, to give AT&T the right to end landline phone service in the state—but only upon approval by the Federal Communications Commission (FCC). AT&T has not yet sought that approval and said in 2017 it could be years before landline service ends in Illinois. 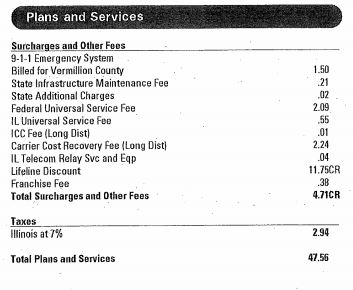 AT&T customers enrolled in the Lifeline program see a monthly “Lifeline Discount” of up to $11.75 a month in the “Plans and Services” section of their landline bills. Now AT&T is ending the federal discount for most of these customers.

What does CUB think about this development?
We have called on AT&T to reinstate the discount immediately. (Read our news release.)  AT&T’s move will be hard on low-income callers who qualify for the Lifeline discount.

CUB will continue to do everything it can to challenge AT&T as the company prepares to seek permission from the FCC to end landline service. And until AT&T actually wins that approval, the Lifeline credit should be reinstated.

CUB has long said that other forms of phone service are not perfect substitutes for landlines. For example, with cellphones, advanced 911—which can trace the exact location of a wireless call—is not yet fully implemented across Illinois. Traditional phone service doesn’t need to be charged, it doesn’t go out in an Internet or power outage, and it doesn’t leave 911 dispatchers guessing. (See “What are my choices beyond AT&T landlines?”)

What can I do?
Please sign our petition to AT&T demanding the company to immediately reinstate the Lifeline discount.

What should I do if I’m an AT&T Lifeline recipient?
You might have to shop around for another company that offers the Lifeline discount. Here is a listing of Lifeline providers in AT&T territory, most of which are wireless carriers: Data Net Systems LLC (described as a wireline company), I-Wireless, American Broadband and Telecommunications, Virgin Mobile, Illinois Valley Cellular, Telerite Corp., Tracfone Wireless, United States Cellular Corporation, and YourTel America.

If you want to stay with AT&T as your landline carrier, even if the company no longer offers the discount, these plans are offered to most customers and may help you lower your costs:

Call AT&T if you are interested in these plans: 1-800-288-2020. Warning: People have reported that AT&T customer service reps sometimes say the above plans don’t exist. They do exist. You might have to call multiple times to sign up for Call Plan 30, Local Unlimited Package, or Illinois Complete Choice Basic. If you have tried a few times and are still unable to get the plans, please send us a summary of your experience—including the dates and times you’ve called AT&T and with whom you spoke.

What are my choices beyond AT&T landlines?
AT&T offers alternatives to traditional landline service. Depending on your personal circumstances, these options can be either more expensive or less reliable, or both:

Cellphones: Most cellphone plans include unlimited talk and text, with data usage fees. Not including the cost of the phone itself, a single plan with unlimited talk and text and data usage ranges between $30 and $80, including monthly line fees. These are averages. Prices will vary based on the number of lines, and data plans vary across networks. Unlike traditional landlines, cellphones need to be charged, they can be plagued by poor service in “dead zones,” and they may leave 911 dispatchers guessing about your location. Advanced 911—which can trace the exact location of a cellphone—has yet to be fully implemented in Illinois.

Bundled Packages: The AT&T service traditionally called “UVerse” includes a bundle of Internet and home phone. For the first year, the company charges about $72 a month. Comcast offers a “Double Play” package that includes Internet service and home phone service for about $55 a month for the first year. Digital phone service like this requires a broadband connection, at an extra cost, and you can’t make calls during an Internet outage or a power outage (without a battery back-up).

Your ticket for the: Q&A on AT&T ending the Lifeline discount for landline customers