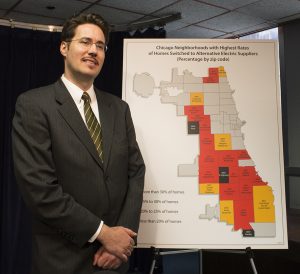 “This legislation would right some of the wrongs in the alternative supplier industry,” said Bryan McDaniel, CUB’s Director of Government Affairs.

Senate Bill 651, the Home Energy Affordability and Transparency (HEAT) Act, would begin addressing the scams and ripoffs from alternative suppliers that have overcharged Illinoisans by more than $551 million just since 2015–with low-income communities, communities of color, and seniors bearing most of the burden of that lost money.

At today’s press conference, speakers noted that almost every alternative supplier customer loses money compared to what they would pay with the regulated utility; almost no one ends up saving money.

The HEAT Act would require suppliers to notify consumers before their rates rise and obtain their consent before renewing their contract. McDaniel noted that a contract renewal with alternative suppliers sometimes consists of only a postcard notification, and then the customer gets switched to a variable rate where their costs double, triple or even quadruple.

The legislation would also require alternative suppliers to show the utility’s price along with the rate they are selling to avoid false claims of lower rates.

The HEAT Act would prevent high rates from alternative suppliers from sucking up limited public energy assistance funds, such as LIHEAP (Low-Income Home Energy Assistance Program) and PIPP (Percentage of Income Payment Plan), and it would require suppliers to report their rates to the Illinois Commerce Commission (ICC) and Attorney General Raoul.

Your ticket for the: HEAT Act would protect consumers from predatory alternative suppliers