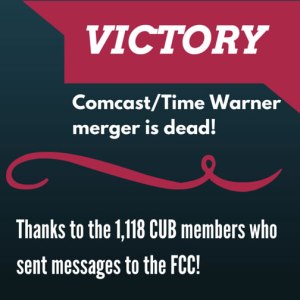 Good news for consumers!  Comcast announced last week that it will drop its bid for a $45.2 billion merger with Time Warner Cable.

The merger between the country’s No. 1 and No. 2 cable companies would have put nearly 30 percent of TV and 55 percent of broadband subscribers under the same company.  That would have put an unprecedented amount of power in the hands of Comcast— the company that had a string of customer service and legislative fiascoes this year (see here, here, here, and here) and was voted “Worst Company in America” in a 2014 Consumerist poll.

The merger definitely had CUB raising some eyebrows, to say the least, which is why we asked you to take action.  Since the spring of 2014, more than 1,100 CUB Action Network members sent messages asking the Federal Communications Commission (FCC) to reject the merger unless significant consumer protections were put into place.

Last week, the FCC informed the two companies that it was leaning towards concluding the merger would not be in the best interest of consumers.  In anticipation of rejection, Comcast announced Friday that it would no longer pursue the deal.

Thanks to everyone who sent a message asking the FCC to protect consumers.  Your pressure worked!

Your ticket for the: Ding dong the Comcast/Time Warner merger is dead…