Lighting accounts for approximately 20 percent of a typical electric bill, so using energy efficient bulbs can result in big savings.

If enough people switch to LEDs (light-emitting diodes), by 2027 the U.S. could save about $265 billion, according to a Department of Energy estimate.

But how do you choose the right LED for your needs? The Lighting Facts label, on bulb packages, is required by the Federal Trade Commission and is modeled on the Nutrition Facts label you are used to seeing on food. The label helps shoppers meet their lighting needs using an easy-to-read format. 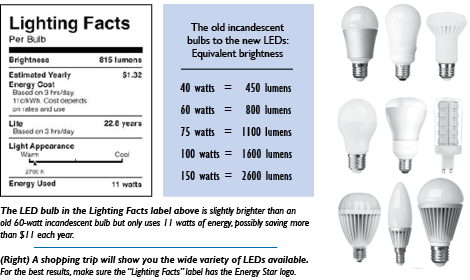 Brightness: Many of us are accustomed to associating a light bulb’s wattage with a certain level of brightness. But watts are actually a measure of energy output, not brightness. LEDs use significantly less energy than traditional incandescent bulbs so wattage isn’t a good measure of their brightness.

Look instead at a bulb’s lumens. Lumens refer to the actual measurement of visible light. More lumens signify a brighter light; fewer lumens mean a dimmer light. See the chart to convert the light output of the old incandescent bulbs to the lumens measurement of LED bulbs.

Cost: The Estimated Yearly Energy Cost is a good tool for comparing different bulbs, whether different LEDs or different types of bulbs.

While more expensive than incandescents and CFLs, the cost of LEDs is declining rapidly, thanks to advances in the technology and energy efficiency discounts in Illinois.

Given that an LED can last more than 25,000 hours — roughly 25 times the lifespan of an incandescent bulb — the cost per hour of usage is actually less over the long run, making LEDs a good long-term investment. And unlike CFLs, LEDs contain no mercury and are more durable.

Life: High-quality LED bulbs can last more than 20 years, but not all bulbs are created equal.
Look for the square Energy Star logo on the Lighting Facts label. To use that logo, the bulb must be able to last at least 25,000 hours (22 years) before it begins to dim, and must have lighting quality equal to or greater than other types of bulbs.

Appearance: LEDs come in many different shades and levels of brightness. Color is measured by a unit called Kelvins (K).

Warm shades, or bulbs with a low number of Kelvins, are better for lighting general living spaces. Cool LEDs are better for kitchens and work spaces. Bulbs highest on the Kelvin scale mimic daylight and are good for reading.

Other considerations: Many LEDs are not compatible with dimmer switches. Check that your bulbs are dimmable before using them with a dimmer switch.

LEDs give off much less heat than incandescents, but are very sensitive to the heat they do emit. If LEDs are used in an enclosure, there is nowhere for the heat to go, greatly shortening the bulb’s life. The packaging should say if a bulb is safe to use in enclosed spaces.

Your ticket for the: A CUB Buyer’s Guide to LED Bulbs