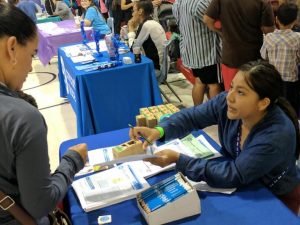 CUB warns consumers that alternative supplier plans can cost you a lot more than what you’d pay with your regulated utility. At a recent event, CUB’s Outreach Assistant Anairis Boror had an interesting encounter with people who seemed to be representing an alternative supplier.

Anairis was working CUB’s table at a recent festival in Chicago, giving helpful tips to attendees about their utility bills. With multiple vendors around the festival, she noticed a group of four or five young adults, maybe in their early 20’s, setting up a table directly in front of CUB’s. “Their table had a sign saying ‘free gift cards'”–and soon, she said, the group was yelling “Free gift cards!”

The table was stacked with various gift cards to places like Amazon–but Anairis didn’t see any materials identifying the company handing out the cards. “I was just trying to listen and see if I could hear anything,” she said.

A man who had visited CUB’s table earlier, walked up to the gift-card table, and seemed to get in a minor argument with the young people. That’s when Anairis sensed they were from an alternative supplier, offering gift cards to sign up new customers. The young people were using their tablets and phones to input peoples’ information–probably account numbers–in exchange for a gift card.

Here’s why such sights can be disturbing to CUB staffers: The Illinois Commerce Commission’s (ICC) 2018 Annual Report cited a record $227.6 million in losses for consumers with alternative suppliers over the past year. Remember, in the current market, your regulated utility–ComEd or Ameren–typically offers you the lowest rate. (See CUB’s fact sheets on alternative electric supplier rates for ComEd and Ameren.)

Anairis approached one of the young women handing out gift cards, and asked what company she represented. She mumbled the name, but volunteered that the only requirement for getting a gift card was to be a ComEd customer. Anairis asked what rate they were offering: “She said, ‘What do you mean what’s the rate?’ She didn’t even know what I was talking about.”

Anairis went on to tell the woman she worked for CUB, and this is the kind of suspicious activity we warn customers about. “We see people, especially senior citizens, get scammed just like this,” Anairis says.

Be wary of anyone trying to lure you to give up your personal information, including your power bill or account number. Get details about what company is asking, and why.

If you would like to see where CUB’s team will be next, check out our events calendar.

Your ticket for the: CUB comes face-to-face with a sketchy alternative supplier