CUB “helped save my company from bankruptcy” with $82,000 credit 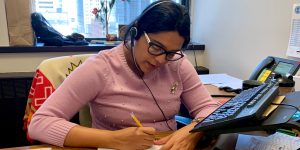 Consumer Rights Specialist Annie Warnock on the phone with consumers day to day.

Devin B. won’t ever forget the monster ComEd bills he feared would bankrupt his small business before it even started.

A 38-year-old software engineer in Chicago, Devin has devoted recent years to a side business, with a dream of converting a 10,000 square-foot building into studios and workshops for artists and other creators. But that dream was threatened by those jaw-dropping ComEd bills.

293,000 kWh would be a lot of electricity for a bustling supermarket about five times the size of Devin’s business. But it was about to get worse: ComEd sent a new bill about a week later, and this time the utility asked for a full payment of $75,617 by mid-April.

Devin spent frustrating weeks trying to get help—but he got nowhere with ComEd. “I didn’t know what to do or who to turn to,” he said.

He took his plight to Facebook, and somebody suggested he contact a group he had never heard of before: CUB. While ComEd seemed “inept or uncaring,” CUB was proactive. Consumer Rights Specialist Annie Warnock filed a complaint with ComEd, providing a detailed timeline of events, and Devin thought: “Wow, someone actually cares.”

But Devin didn’t stop there. He also filed a complaint with the Illinois Commerce Commission (ICC), building off the information Annie had compiled. “ComEd finally started paying attention,” Devin said.

Some six weeks after Devin first noticed the big bills, ComEd told CUB that a second electric meter installed the year before had been mislabeled, leading to a billing error. Devin’s account was re-billed, crediting him a grand total of $82,888.92. He also received a refund check of about $1,100.

“CUB is a vital resource. You guys helped save my company from bankruptcy,” Devin said.
And he received a valuable lesson in consumer advocacy and utilities. “I learned that it’s not over ‘til it’s over,” Devin said. “You can’t stop fighting for what it is you want.”

Your ticket for the: CUB “helped save my company from bankruptcy” with $82,000 credit

CUB “helped save my company from bankruptcy” with $82,000 credit