For the seventh consecutive year, Illinois had the lowest average electricity bills in the Midwest, according to the U.S. Energy Information Administration (EIA).

But nobody thinks power bills are low—there’s more work to do. That’s why CUB and other consumer/environmental advocates are pushing Illinois to pass the Clean Energy Jobs Act (CEJA). The state legislation would expand energy efficiency and fend off a federal ruling that could increase power bills by up to $1.7 billion. CUB likes the bill because it would hold utilities accountable and move Illinois to 100 percent clean energy without hiking taxes, raising electricity bills or giving a bailout to Exelon or fossil fuel companies.

The EIA, the statistical arm of the Department of Energy, reported that Illinois’ average monthly bill, $94.98, in 2018 fell well below the national average of $117.65. In fact, Illinois has the seventh lowest average bill in the country. Utah, the cheapest, is at $77.25, and Hawaii tops the list with $168.13. Here’s how Illinois stacks up against other Midwestern states: 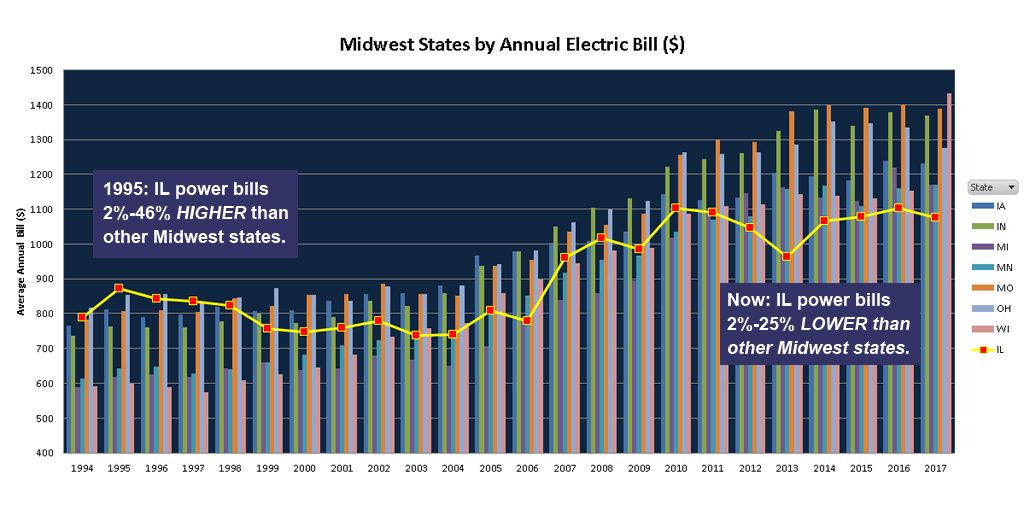 Illinois, which at one point had the highest bills in the Midwest, has now had the lowest since 2012.

A big reason for Illinois’ perennially lower electric bills is strong clean energy policy, including the Future Energy Jobs Act (FEJA). The act, which was passed by the state legislature in 2016, represented a historic expansion of energy efficiency programs that have already helped lower bills by billions of dollars. The act also helped to further diversify Illinois’ power portfolio, taking advantage of the falling cost of renewable energy, like wind and solar.

Now a few years since FEJA went into effect, Illinois wants to double down on the bill’s successes with a new piece of legislation, the Clean Energy Jobs Act (CEJA).

CEJA, the state’s most comprehensive and consumer-friendly energy legislation, would move Illinois to 100 percent renewable energy by 2050, while protecting consumers’ bottom lines. It would expand efficiency programs, sparking an estimated $700 million a year in savings. Most urgently, the legislation also would fend off a ruling by the Federal Energy Regulatory Commission (FERC) that could raise power bills for northern Illinois consumers by up to $1.7 billion over the next decade.

FEJA helped Illinois secure some of the lowest electricity bills in the country, and CEJA would help protect and extend that advantage. Please urge your legislators and Gov. J.B. Pritzker to pass CEJA and help make Illinois the country’s leader in affordable and clean energy.

Your ticket for the: IL power bills lowest in the Midwest (again)–but that advantage is threatened