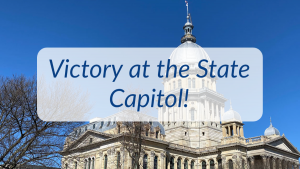 The General Assembly has passed landmark energy legislation that consumer and environmental advocates have worked for years to achieve. The Climate and Equitable Jobs Act puts Illinois on a path to 100 percent clean energy while implementing the strongest utility ethics reforms and energy efficiency provisions in state history. And it aims to provide a spark to the economy by bringing thousands of clean energy jobs to communities that need it the most.

“The General Assembly’s passage of the Climate & Equitable Jobs Act is a victory for consumers and the environment. This comprehensive clean energy legislation ensures that, as Illinois mounts an urgently needed defense against catastrophic climate change, the state is on a path to achieve an affordable clean energy future and hold utilities more accountable, ” CUB Executive Director David Kolata said in a statement. “Without this blueprint, Illinois consumers were destined to pay higher electricity bills as climate change continued unchecked and the costs of long-term capacity reserves in energy markets escalated.”

The act (Senate Bill 2408) passed the House 83 to 33 Sept. 9, and the Senate 37 to 17 on Sept. 13. (See how your senator and your representative voted.) Gov. J.B. Pritzker, who has championed comprehensive energy legislation, signed the bill into law on Sept. 15 in a ceremony at Chicago’s Shedd Aquarium. (Watch CUB’s Facebook Live about the Climate & Equitable Jobs Act.)

CUB, as a member of the Illinois Clean Jobs Coalition, had worked for passage of the 2016 Future Energy Jobs Act, which in itself was a historic clean energy breakthrough. For the last two years, the coalition–a group of 200 consumer, business and environmental groups–supported the Clean Energy Jobs Act (CEJA) as the best way to protect consumers’ utility bills and fight climate change by moving to 100 percent clean energy.

The coalition added strong utility accountability provisions to the legislation after ComEd was caught by federal prosecutors in a corruption scandal over its attempts to pass energy legislation that allowed it to secure hundreds of millions of dollars in rubber-stamped rate hikes.

CEJA was one of about a half-dozen energy bills being considered by the Illinois General Assembly. The governor, who in January of 2020, called for energy legislation that would put “consumers and climate first,” re-started negotiations earlier this year to develop a compromise bill. As with any compromise bill, CUB doesn’t support everything in it, but if implemented correctly the legislation will be a big net win for consumers.

A summary of provisions in the bill is below.  (The Clean Jobs Coalition also has a breakdown of the bill.)

Provisions to hold utilities more accountable: After the ComEd scandal, the Clean Jobs Coalition pushed for stronger accountability provisions in the bill, and many of them are in the final compromise bill.

A major expansion of cost-saving opportunities: CUB has long argued that the cheapest kilowatt-hour (kWh) is the one you don’t use. The Future Energy Jobs Act (FEJA) in 2016 established historic commitments for ComEd and Ameren to reduce energy waste. This act improves on energy efficiency standards that have already saved consumers billions of dollars.

A strong planning process: One of the strengths of this legislation is long-range planning to find least-cost ways to fight climate change and move to 100 percent clean energy. The legislation:

Paving the way for cleaner, more affordable transportation options: For years now, CUB has argued that Illinois needs to prepare for a future when electric vehicles will dominate Illinois roadways. Gas-powered cars have become one of the biggest drivers of climate change. Strong policy will help the environment, but also help control energy costs and give all Illinoisans access to electrified transportation, which can be dramatically less expensive than traditional forms of transportation. The legislation:

Support for Exelon’s nuclear plants: Exelon got billions of dollars less than what it wanted. The cheapest, fastest way to 100 percent clean energy means Illinois has to rely on carbon-free nuclear plants as the state ramps up renewable energy. The legislation requires the company to prove on a yearly basis how much support it needs.

CUB estimates the legislation will cost customers an average of between $3 and $4 per month over the next five years. That cost estimate doesn’t include savings made possible by this legislation (for example, savings from energy efficiency, low-cost solar energy, lower capacity and energy prices). With proper implementation, the bill should lead to consumer savings over time and reflects a consumer-friendly approach to solving for climate change.

It’s a compromise bill, so CUB doesn’t agree with all the provisions. For example, while the act expands and improves electric efficiency, it does not contain gas efficiency provisions that could have reduced heating bills by hundreds of millions of dollars a year. CUB will continue to fight for efficiency improvements in the years ahead.

But all told, these are historic improvements for energy customers in Illinois, and this bill is a big net win for consumers.

“CUB’s job now is to help solidify the victory for consumers, by rolling up our sleeves and working with all parties—legislators, regulators, utilities and consumer groups—to implement this bill correctly and reap the full potential of its promising outlook for consumers,” Kolata said.