Q&A: What is the QIP surcharge on my gas bill?

What is the QIP surcharge?

The Qualified Infrastructure Plant, or QIP, fee is charged by Ameren Illinois, Nicor Gas and Peoples Gas, the three biggest gas utilities in Illinois. It covers certain costs associated with replacing natural gas pipes and other work on the utilities’ gas delivery system. You may also see it referred to as the “Qualifying Infrastructure Plant Surchg” or “Qual Infrastructure Charge.” CUB argues the charge is contributing to rapidly rising gas bills and has helped cause hardship for customers across the state. 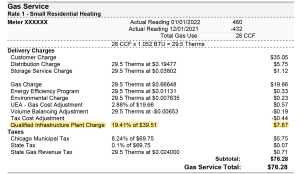 Click on the image to see the whole sample bill.

Where do I find the charge on my bill?

You can find the QIP charge under the “Delivery Charges” section of your bill. On this sample Peoples Gas bill, the charge is listed as the “Qualified Infrastructure Plant Charge,” highlighted in yellow.

How did it get on my bill?

CUB opposed the 2013 law passed by the Illinois General Assembly that allowed major gas utilities to add the QIP rider (special surcharge) to bills. Under the law, the surcharge is slated to sunset on Dec. 31, 2023.

Why did the utilities want the QIP?

Natural gas utilities favor the QIP because the charge provides them with a regulatory shortcut – it allows the utilities to recover certain investment costs more quickly than through the standard 11-month rate case proceeding before the Illinois Commerce Commission. The utilities say the surcharge is necessary to pay for pipe replacement, but they are legally obligated to keep the system safe and reliable, and they maintained that system for decades without hitting consumers with an extra charge.

The QIP charge is less about pipe replacement and more about giving the utilities a faster way to rake in revenue. Utilities and investors like the steady, guaranteed revenue increases the QIP rider gives the gas companies, paid for by customers who shoulder the higher rates. Utilities typically make a high level of capital spending a key part of their growth message to Wall Street.  And Illinois’ major utilities have launched expensive and accelerated pipe-replacement and other capital projects that they fund through delivery charges on gas bills, including the QIP. In recent years, Ameren Illinois has raised delivery rates by $76 million, and Nicor Gas by 77 percent, or more than $500 million. That includes the highest gas rate hike in Illinois history, $240 million in 2021.

How does the QIP work?

The QIP charge is listed as a percentage fee on your delivery charges. The percentage is determined by a formula in utility tariffs, derived from the 2013 law, to help utilities recover investment costs related to capital projects, such as pipe-replacement, meter relocation and changing the utilities’ pipe networks from low pressure to medium pressure. The percentage can change on a monthly basis. Each year, state regulators hold a review to make sure the QIP revenue for each utility matches the investment costs incurred and whether the costs were prudent, and they can order refunds. In the past, such reviews of Peoples Gas have led to small refunds for consumers.

If a gas utility receives a delivery rate hike, the costs recovered by the utility through QIP will be transferred out of the surcharge to standard delivery rates (the customer charge, the per-therm distribution charge). Then the QIP charge will temporarily zero out–but it will soon begin to increase on customers’ bills until the next utility rate case.

How high is the QIP charge?

Why does CUB oppose the charge?

CUB opposes the QIP because utilities are taking advantage of the surcharge to rake in revenue more quickly, which is driving up gas bills and helping to push many customers into hardship. We have long warned that the overly aggressive pace of spending by the big utilities is intensifying a heating-affordability crisis, which is being felt most acutely in Chicago. There, the QIP helps fund Peoples Gas’ pipeline-replacement program, which a 2015 state audit concluded was poorly managed. One review showed projected pipe-replacement costs had skyrocketed from about $2 billion to $11 billion—and an analysis by the Illinois Attorney General’s office estimated that gas bills could double over the next 20 years.

Also, throwing billions of dollars at a network based on a fossil fuel that will only make climate change worse is no way to “modernize” our heating system. We must find heating alternatives that are based on cleaner energy. CUB just released a study that found customers in Chicago shifting from gas to highly efficient electric heat could save billions of dollars in years to come.

What can I do about it?

Send a message to your legislators. We’re fighting for state legislation (House Bill 3941/Senate Bill 570) that would eliminate the charge, subject the gas utilities to more traditional regulation and rein in their overly aggressive spending. The proposal calls for pipe-replacement to move forward, but at a more responsible pace and under more regulatory scrutiny.

Your ticket for the: Q&A: What is the QIP surcharge on my gas bill?

Q&A: What is the QIP surcharge on my gas bill?