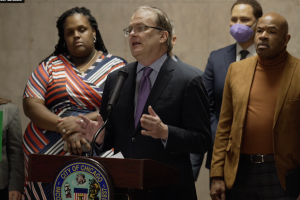 At a news conference, CUB’s David Kolata advocates for a “Clean Buildings, Clean Air” ordinance to help secure cleaner, safer and more affordable heating options for consumers: “Chicago is in a heating-affordability crisis….”

Today, advocates gathered at City Hall to urge the Chicago City Council to pass a “Clean Buildings, Clean Air” ordinance that would establish emissions standards for newly constructed buildings. The ordinance would ensure new buildings in Chicago are built to be fossil-free with efficient appliances that lead to improved indoor air quality and energy bill savings for future homeowners and tenants.

At a news conference outside City Council chambers (watch the video), members of the Illinois Clean Jobs Coalition (ICJC) spoke about the urgency of passing a local “Clean Buildings, Clean Air” ordinance that would set emissions standards for new construction projects, similar to laws passed in other major cities, including Boston, New York City and Los Angeles. In Chicago, where the burning of gas accounts for nearly two-thirds of carbon emissions, the ordinance would be a key component to an overall plan for equitably transitioning to cheaper and cleaner ways to heat and power buildings. Supporters hope to get such an ordinance proposed and passed as soon as possible.

“Chicago is in a heating-affordability crisis because gas prices have hurtled out of control – and that was before Peoples Gas proposed another staggering rate hike this month,” said David Kolata, executive director of the Citizens Utility Board (CUB), a nonprofit consumer watchdog group. “But the good news is that we can adopt construction standards that move away from dirty, expensive gas, curb heating bills in the long-run, and protect our health and the environment.”

Last year, Chicago announced its transition to 100% renewable energy for government buildings by 2025, making it one of the largest city governments in the country to commit to reducing its carbon footprint. Then in October 2022, the City-created Chicago Building Decarbonization Working Group (CBDWG) released a report on how Chicago could transition to cleaner buildings in a way that benefitted and protected the bottom lines of all consumers, including those in environmental justice communities. The working group recommended drastically cutting fossil fuel use and improving energy efficiency in new construction projects.

One of the most effective ways to reduce carbon emissions would be through building electrification—replacing gas equipment such as furnaces and stoves with cheaper, cleaner, and more efficient electric counterparts, including heat pumps and induction stovetops.

“Chicago must move away from dangerous, expensive and outdated methods of heating our homes, and we must not leave behind communities already disproportionately impacted by pollution,” said Pastor Scott Onqué, policy director of Faith in Place, a faith-based environmental justice nonprofit. “We have a real opportunity to improve community health, create more equitable clean energy jobs, make bills more affordable and fight our shared climate crisis.”

Not only are affordability and sustainability issues for consumers, but so are the health impacts of using natural gas heating.

“The cost of natural gas is too high. It’s not just our bank accounts that are suffering, but it’s also our health. Neighborhoods like mine already face disproportionate health impacts due to a long legacy of environmental racism in Chicago,” said Adella Bass, lead health equity organizer for People for Community Recovery, an environmental justice nonprofit based in Altgeld Gardens. “Moving away from natural gas in buildings is a step in the right direction as it will bring jobs, health benefits and more affordable bills. We are committed to working with  the City to ensure the transition happens equitably and prioritizes benefits for my neighborhood and other environmental justice communities.”

The impact of spiraling gas bills has been devastating for Chicago residents. In September 2022, before the winter-heating season even began, nearly one-in-five (18.5%) of Peoples Gas customers were more than 30 days past-due on their bills.

Health: There is mounting evidence that cooking with gas produces high levels of pollutants that threaten our health. In fact, burning a gas stove for one hour can produce nitrogen dioxide levels that exceed national standards for air quality, according to RMI, a sustainability think tank. RMI also linked the use of gas stoves to a 42% increase in rates of childhood asthma and a wide variety of additional problems, including changed lung function and cardiovascular effects.

Climate: The United Nations’ Intergovernmental Panel on Climate Change warns that governments have to act now to prevent the most catastrophic and expensive consequences of climate change. It’s impossible to effectively fight climate problems if most homes burn fossil fuels—especially in Chicago, where the City estimated that about 70% of its carbon emissions come from the burning of gas in buildings.

While these are difficult challenges, they should also raise awareness of a promising opportunity for Illinois consumers. A recent report by NRDC (Natural Resources Defense Council) found that Chicagoans who switch to all-electric appliances by 2023 could save up to $1,445 on their energy bills in their first year of electrification. Homeowners and tenants of newly built, all-electric single family homes could see long-term cost-savings of $20,000 and multi-family homes cost-savings of $15,000 over a 20-year period. Lower and moderate income households could see even greater savings, thanks to electrification and energy efficiency incentives provided through the federal Inflation Reduction Act.

Your ticket for the: Advocates urge City Council to propose cheaper, cleaner way to heat new buildings in Chicago