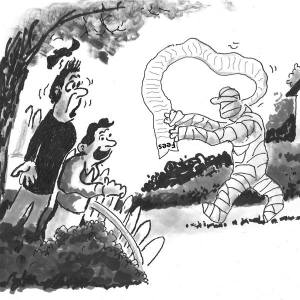 “That’s no mummy! Frank just got his cellphone bill.”

We hope this is the beginning of the end for the insidious “cramming” scam. The nation’s big four cellphone companies are voluntarily banning most premium texting services from their bills–charges that have been a major culprit in the scam.

The agreement was pushed by 45 state attorneys general, including Illinois’ own Attorney General Lisa Madigan. It involves AT&T, Sprint and T-Mobile. Oddly, the nation’s biggest carrier, Verizon, did not sign on to the agreement. The company said it planned to drop such texting services from its bills anyway–but if that’s the case it begs the question: Why didn’t Verizon just join the agreement?

Cramming is a particularly nasty scam involving shady, third-party companies that “cram” charges on your bill for services that you never ordered or used. A National Consumers League (NCL) analysis this year estimated that wireless cramming costs consumers $887 million a year.  In Illinois, CUB sounded the alarm about the scam a year ago when it and wireless research firm Validas said the number of potentially fraudulent fees on bills had nearly doubled over the past year.

Such “premium” services include celebrity gossip items and horoscopes. One of CUB’s lawyers went months before discovering that she was paying $9.99 a month for “Lovegenie tips.” (We give her a hard time about that one!)

This is a major victory, but there’s more work to be done. The NCL–which CUB has partnered with to call for better cramming safeguards–said better regulation is still necessary to give the agreement between the AGs and the wireless companies the force of law, and to protect customers with other companies.

Your ticket for the: A gut punch to cellphone scam artists