FCC to consumers: Here, you take the keys! 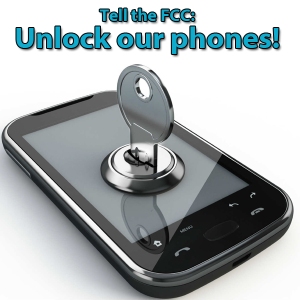 Back in September, CUB launched this campaign asking the FCC to unlock cellphones. The new chairman is now pushing for the change.

It’s hard to believe that it’s actually illegal to take a smartphone to a new carrier, without getting your old carrier’s permission, even if you’ve already paid for the device in full. In fact, it’s so absurdly illegal that the maximum penalty is a $500,000 fine and up to five years in prison.

New FCC Chairman Tom Wheeler seems to have gotten the message. In a recent letter to the wireless industry, he wrote that it’s time for the industry to  recognize “full unlocking rights” or (gasp) “for the FCC to regulate.” (That “r” word must be like fingernails on a chalkboard to a cellphone CEO.)

Wheeler would like to see action during the Holidays, so we’ll see how the wireless industry reacts. It doesn’t seem like anyone’s arguing against a carrier’s right to recoup its costs, but Wheeler wants the cellphone carriers to at least notify customers when their smartphone has been paid off and is eligible for unlocking, or, even better, to unlock a device automatically for free.

This is an encouraging development, but there are even bigger issues to resolve before we have a truly competitive wireless market that allows people to freely roam from carrier to carrier. T-Mobile and AT&T use a different network (GSM) technology than Sprint and Verizon (CDMA). Mass unlocking of phones could spark a lot of complaints from unhappy customers who can’t use their devices with another network, carriers claim.

Ok, but that doesn’t mean we should continue a bad policy. Still, one industry official says this messy, not-so-little detail “has gotten lost in the debate.” On the bright side, new technology is making it easier to make phones compatible with multiple networks.

Your ticket for the: FCC to consumers: Here, you take the keys!

FCC to consumers: Here, you take the keys!