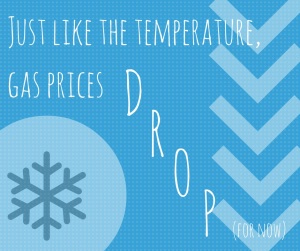 The temperature isn’t the only thing that’s dropping. Gas prices have fallen by up to 31 percent this month, compared with December.

Here’s a sampling of what major Illinois utilities are charging this month compared with last:

Interestingly, Peoples Gas, which along with its sister company, North Shore Gas, charged the highest rates in Illinois last year, had the biggest drop from December. The 18-cents plunge this month gives Peoples the lowest gas rate in more than a decade.

Why the drop? According to the Energy Information Administration (EIA), the statistical arm of the Department of Energy, the falling gas prices reflect a lower heating demand and higher natural gas production.

But who knows how long this will last—especially given the latest cold snap. In 2014, utility rates didn’t skyrocket until a few months into the year, after the effects of January’s polar vortex set in. Fasten your seat belts, folks—and follow CUB’s favorite cold weather tips.

Your ticket for the: Illinois natural gas prices drop (for now)