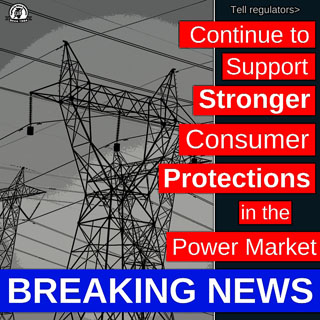 CUB and other consumer advocates applaud the new rules. For about two years, we have been calling for tougher rules to prevent misleading and confusing marketing by alternative electric suppliers. (Read CUB’s statement and send a message to the ICC in favor of the new protections.)

Over the years, CUB has heard horrifying tales of Illinois consumers being charged prices up to six times higher than the regulated utility. Some of those people didn’t even know they were with a power supplier until their bills skyrocketed.

Last September, the ICC began a rulemaking proceeding (Docket No. 15-0512) with the goal of creating a more transparent electricity market. Thanks to Thursday’s vote that goal is now within reach.

The reforms will ensure that working families and seniors are kept safe from high-pressure sale pitches, misleading marketing and rip-offs.

The ICC reforms include:

While the vote is a huge step forward, the new rules will have to survive a lengthy review—so we can’t let up! Please, send a message thanking the ICC and urging it to give final approve.

Your ticket for the: Big ICC ruling for electric shoppers